Over at the southern end of Pasig City, a new iconic masterpiece inspired by some of the world’s most adored monuments is proving to be a real head-turner for those passing along C-5 Road.

You see, there’s a really compelling reason why people look forward to catching a glimpse of the 62-foot Arco de Emperador standing tall and proud at the center of Arcovia City, Megaworld’s 12.3-hectare township which was feted recently as the country’s “Best Mixed-Use Development” at the 2019 Philippines Property Awards.

If you are someone who frequents the area, you’ll notice that there’s no other Instagrammable icon, so to speak, along that stretch of road than this one of a kind Arco. Inspired by the likes of Arco de la Victoria in Madrid, the Brandenburg Gate in Berlin, and the Arc De Triomphe in Paris, the Arco de Emperador was created with the right attributes to make a perfect Instagram shot. The designers of this township had this one simple concept in mind: when you put up an installation to be the focal point of your development, you have to think if it has the right size, the right height, and the right composition for people to get a perfect snapshot. Otherwise, it defeats the purpose of having a photo with an installation as magnificent as the Arco if you have to go far from just to capture it in the frame.

Not only that, a museum will also be built under the Arco, and several parts of the township will have a perfect vantage point of this awe-inspiring masterpiece. The avenue where the Arco and the rotunda are located is called Avenue de Triomphe, so think of the Arc de Triomphe — all roads of the arrondissement emanate from the rotunda. And everyone, no matter how many times they’ve been to the City of Lights, takes a picture. And that’s how Arco de Emperador is shaping up to be. 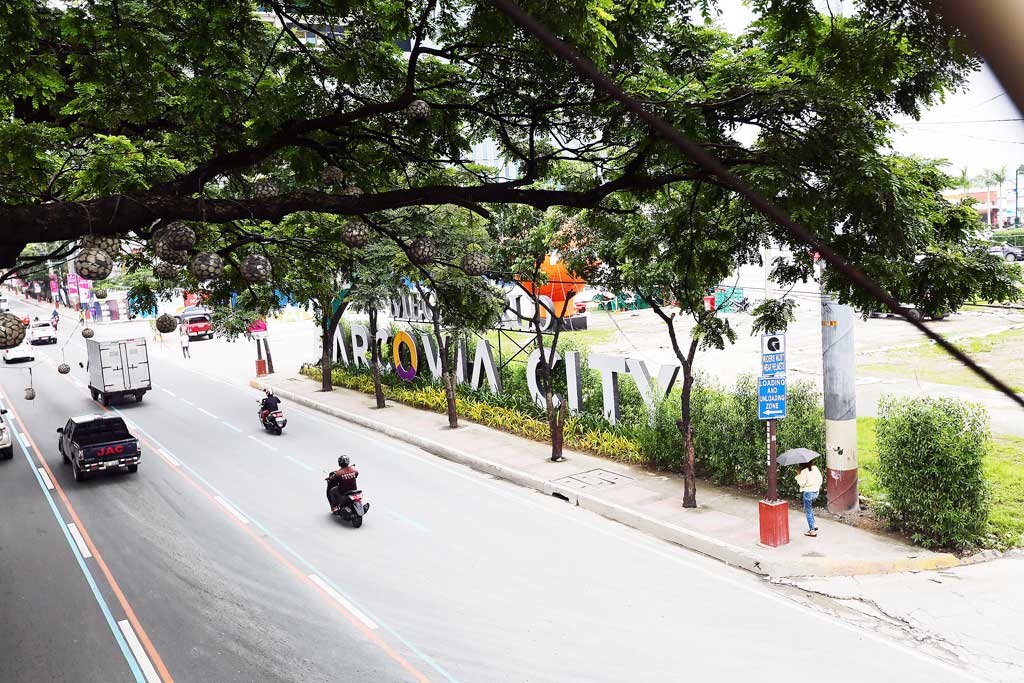 The township will be dotted by 1,000 trees, highlighting Megaworld’s commitment towards reducing the carbon footprint of its integrated developments.

The monument is for all to enjoy, not just future residents and workers at Arcovia. “We have created this as a tourism landmark for Metro Manila to bring out the message of how hard work, passion and perseverance can create a successful man. This is how an emperor is made,” says Kevin L. Tan, chief strategy officer of Megaworld. Installed last year, the monument has bronze statues of three horses, two lions, two trumpeting angels coated in 24k gold and the Emperor on a chariot, symbolizing power, strength, passion and self-made success.

These are proof that this development will truly go beyond being just a mere township as it evolves to become a master-planned tourist destination along C5.

And no one has perfected such a lofty endeavor better than Megaworld.

After all, the property giant has had 30 years worth of perfecting the concept of what really makes a thriving township, dating back from the mid-90s when it launched its first township — and the Philippines’ first too — with Eastwood City in Quezon City. Who can ever think of transforming a sprawling parcel of land housing a former textile factory into a mini city? Who can better think of elevating this idea — something that has been admired and copied by many — than the one who did it first?

And in the case of Arcovia City, who can best duplicate the success that Eastwood City enjoys at this side of the metro than Megaworld? 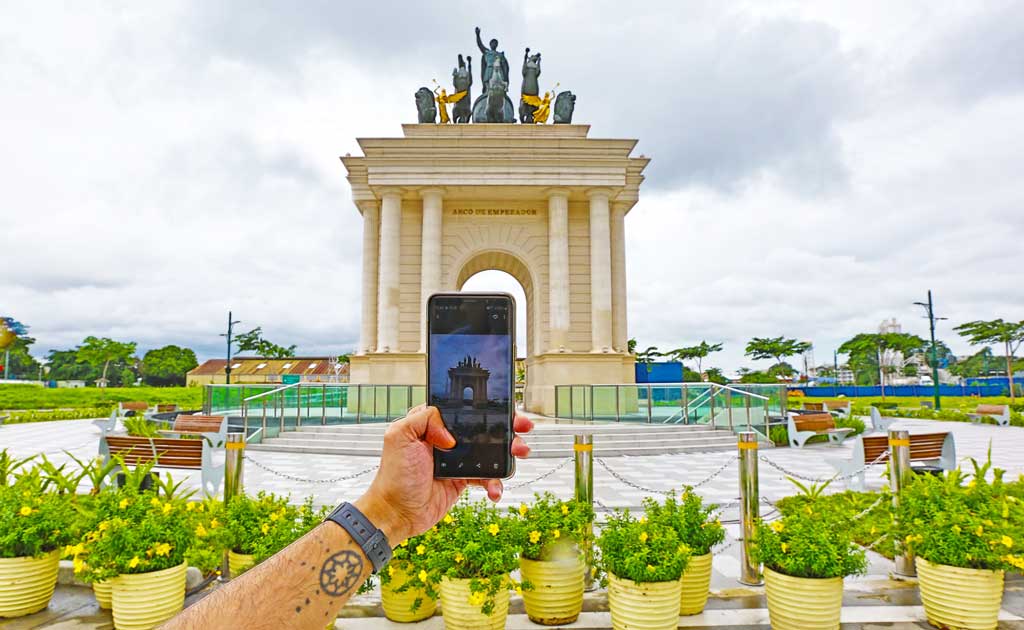 Start Instagramming! With the right height and size, anybody can capture a perfect IG-worthy snapshot of the Arco de Emperador without having to step far away from the iconic art installation. Photos by WALTER BOLLOZOS

Each of Megaworld’s townships has sparked economic activities in cities such as Iloilo, Mactan, Taguig, and Bacolod to name a few. The same is expected of Arcovia, because what used to be Pasig’s industrial zone is now a thriving commercial and residential district with corporate headquarters, BPOs, and condominium enclaves.

The narrative for Arcovia is an ambitious nod to the future generations. Megaworld wants to build a home for young achievers who are embracing their turn at greatness — the young minds who will build the future of the country.

“Our vision for this new township is to inspire the young generation to persevere and work harder to attain their own successes and victories in life. There is a deeper story embedded into this development, and we will tell that story through the installations and attractions around the township,” adds Tan.

You can say this vision is literally cast in bronze with Arcovia City’s centerpiece, a monument called Arco de Emperador, inspired by the Arco de la Victoria of Madrid, and designed by Spanish sculptor Gines Serran Pagan.

The imagery and symbolism of this monument are close to Megaworld founder Andrew Tan’s heart. His Emperador Brandy, which became the world’s bestselling brandy in 2006, has always emphasized success, hard work and values instead of the hedonistic lifestyle associated with liquor campaigns. 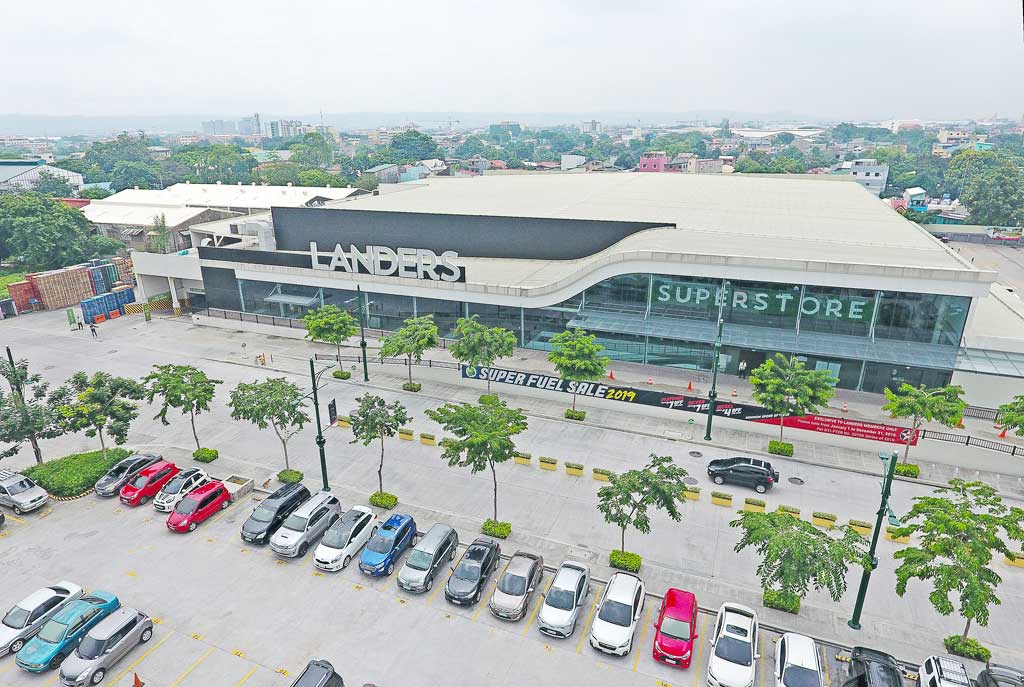 Arcovia City is home to the first and only Landers Superstore in the entire stretch of C5 Road.

In all my interviews with Megaworld executives through the years — whether it’s about the opening of a new CBD, a mall or hotel — they always go back to how Andrew Tan’s vision has shaped each township and even their personal lives with his example of dreaming big, working hard and living simply.

Pagan’s monument casts this inspiration for the ages — “that everyone — no matter who they are, what their background is or where they came from — can work their way towards success. More importantly, it embodies how today’s generation celebrates personal triumphs and victories.”

Arco de Emperador is expected to last for thousands of years, just like the famous bronze statues of Europe. “The angels, together with the animals and the Emperador, form a symbolic group — a sculptural group that is unique here in the Philippines,” Pagan says. “The idea behind the sculpture is the triumph of personal achievement. It’s a symbol that everyone can make it in life, and this is the philosophy of Dr. Andrew Tan, founder of Megaworld. He wanted to fulfill the message of effort and hard work, and achievement, and that everyone can truly be an emperador.”

The monument will also have waterfalls leading to the water feature at the basement area and the future site of the museum, as well as a landscaped plaza with benches.

Arcovia City is also planned to be Megaworld’s greenest urban development yet. The developer is growing 1,000 trees around the township to serve as natural shades for pedestrians and the township’s virtual lung. 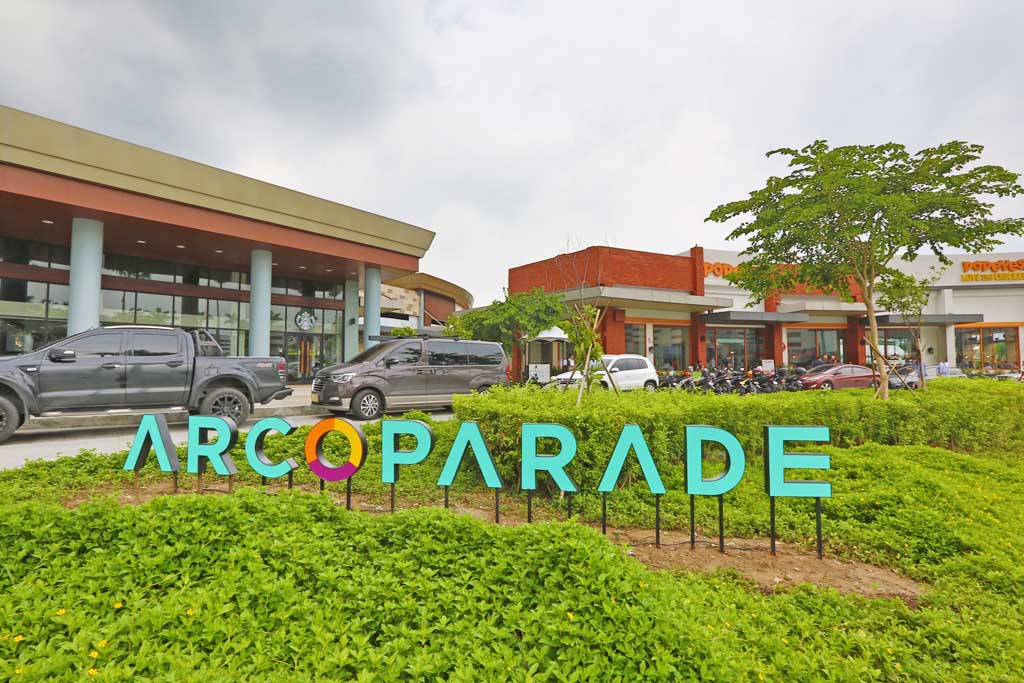 Now open, ArcoParade hangouts include coffee shops and restaurants, including the first Popeye’s in the country.

As the trees are growing, so are the commercial parts like Arco Parade, which features cafes and restaurants, and Landers Superstore, while construction is ongoing for its commercial and residential buildings.

Its first office tower, the 17-story One Paseo, which offers 23,000-square meters of leasable office spaces, is now being constructed, together with a lifestyle mall that has its own parks, a viewing deck, and other leisure facilities.

“Our vision for Arcovia City is to ignite the passion of the young generation to commit themselves to work hard, nurture their passions, and succeed in whatever path they want to pursue. This thrust will be brought to life through the installations and attractions that will inspire people to cultivate passions and celebrate their milestones,” says Tan.

Adventures to the max with Disney Channel Live! at Vista Mall
Scroll to top