Seda Residences Makati general manager Marc Cerqueda gestures at the views from the 35th-floor of the hotel and says, “I can’t decide whether I like it better in the morning or evening.”

Having seen the sweeping views myself in daylight, when you can see most of Makati and Mandaluyong, and at night when cars stuck in traffic create a somewhat surreal streak of red between the skyscrapers and subdivisions — it’s fair to say that it’ll give you pause when you’re asked to choose which is prettier.

A third-generation hotelier, Marc knows this neighborhood very well — or at least he’s gotten to know Makati’s streets and shortcuts since he opened Seda Residences in July because he walks three kilometers to work from his condo and again in the evening to go home.

Located at the North Exchange Tower on Ayala Ave. in the northern side of Makati’s central business district — an area undergoing an overhaul — Seda Residences, according to Marc, “is an ode to Makati.”

“Every Seda has its locality as its theme. In the two lobbies here, the ground floor and reception lobby on the 19th floor, we have two huge murals of Makati by Don Jaime Zobel,” he says. “The artworks are local — Ann Pamintuan’s sculptures will be installed soon — and in the guest floors, Makati is a theme. The whole hotel is like a love letter to Makati. We used local products as much as possible, like the beds from Mandaue Foam, which are excellent and people tell us they get fantastic sleep.” 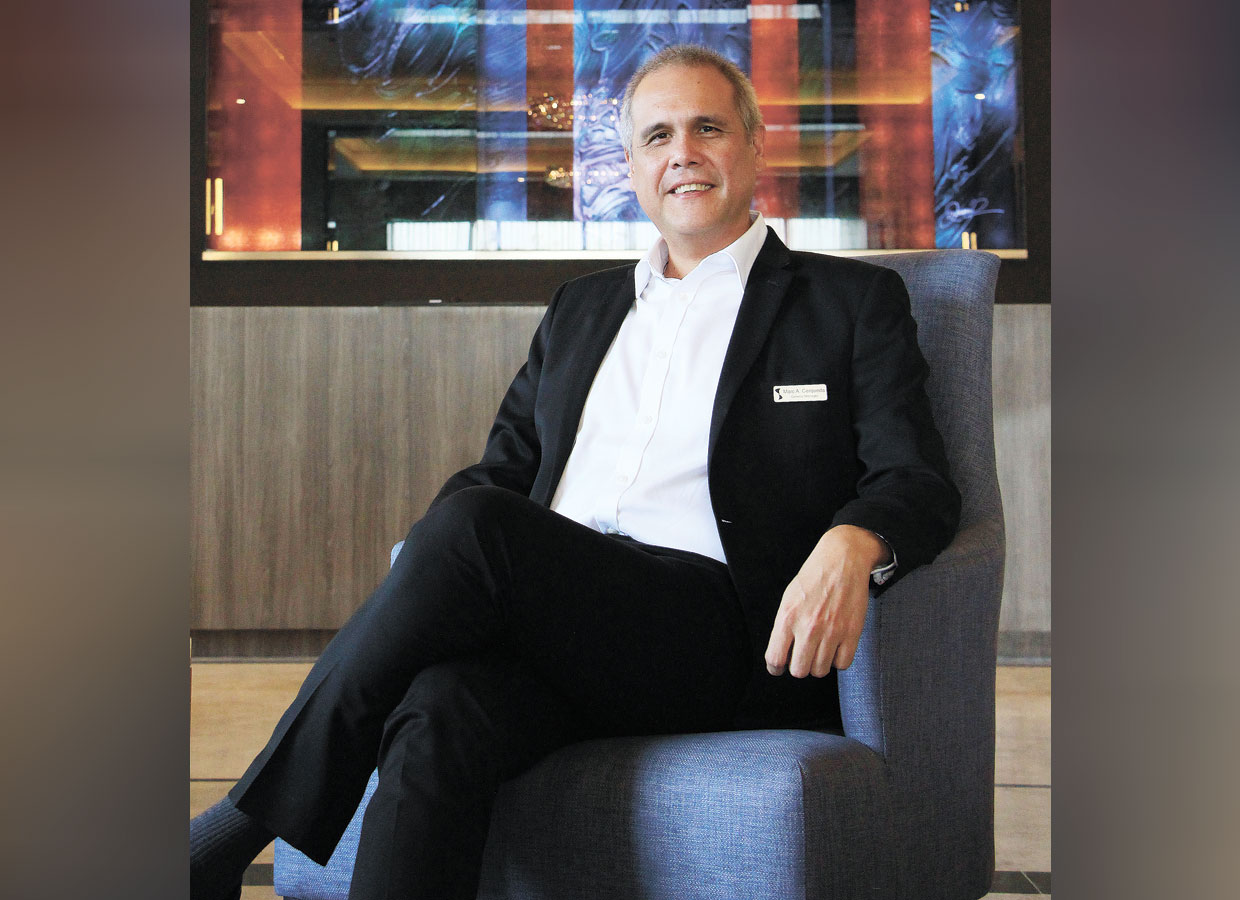 Seda Residences Makati general manager Marc Cerqueda: “We have Filipino hospitality and drive, we have no doubt that our service can meet up to any five-star standard, while the product itself is a four-star hotel at four-star prices.”

Designed by architect Conrad Onglao, the 293-room Seda Residences is located from the 19th to 35th floors of Ayala North Exchange Tower. All the units are furnished with kitchenettes, a living and dining room, HDTV and access to laundry facilities. The units range from 31 sqm. to 43 sqm. for a studio; 50 to 57-sqm. for one-bedroom and 93 to 108-sqm. for two-bedroom.

Seda Residences is the first serviced hotel for the brand. “We expect at least 45 percent of our guests to stay long-term (30 days and up), including expats doing consultancy work for the multinational firms and BPO offices within Ayala North Exchange. Because we are right next to Makati Medical Center, Seda Residences Makati is also convenient for people seeking medical procedures and their families.”

Marc believes location also plays a big role in attracting guests, as well as in positioning their price. “We consider ourselves to be in a prime location between Legazpi Village and Ayala Avenue; we’re a 15-minute walk to Greenbelt, a 20-minute walk to Glorietta. Our prices are between international brands Ascott and Oakwood. We are a solid, four-star business that delivers five-star service.”

Marc adds that being a Filipino brand allows Seda to offer a unique proposition to its customers. “We have Filipino hospitality and drive, we have no doubt that our service can meet up to any five-star standard, while the product itself is a four-star hotel at four-star prices.”

Its Misto restaurant and Straight Up bar on the 35th floor also attract non-hotel guests looking to enjoy drinks and outstanding views at the end of the day. “We’re really pleased with the way the hotel turned out. It has great views all around. There’s just a nice, homey feel to it, which is why the ‘residence’ term applies very well to the property. 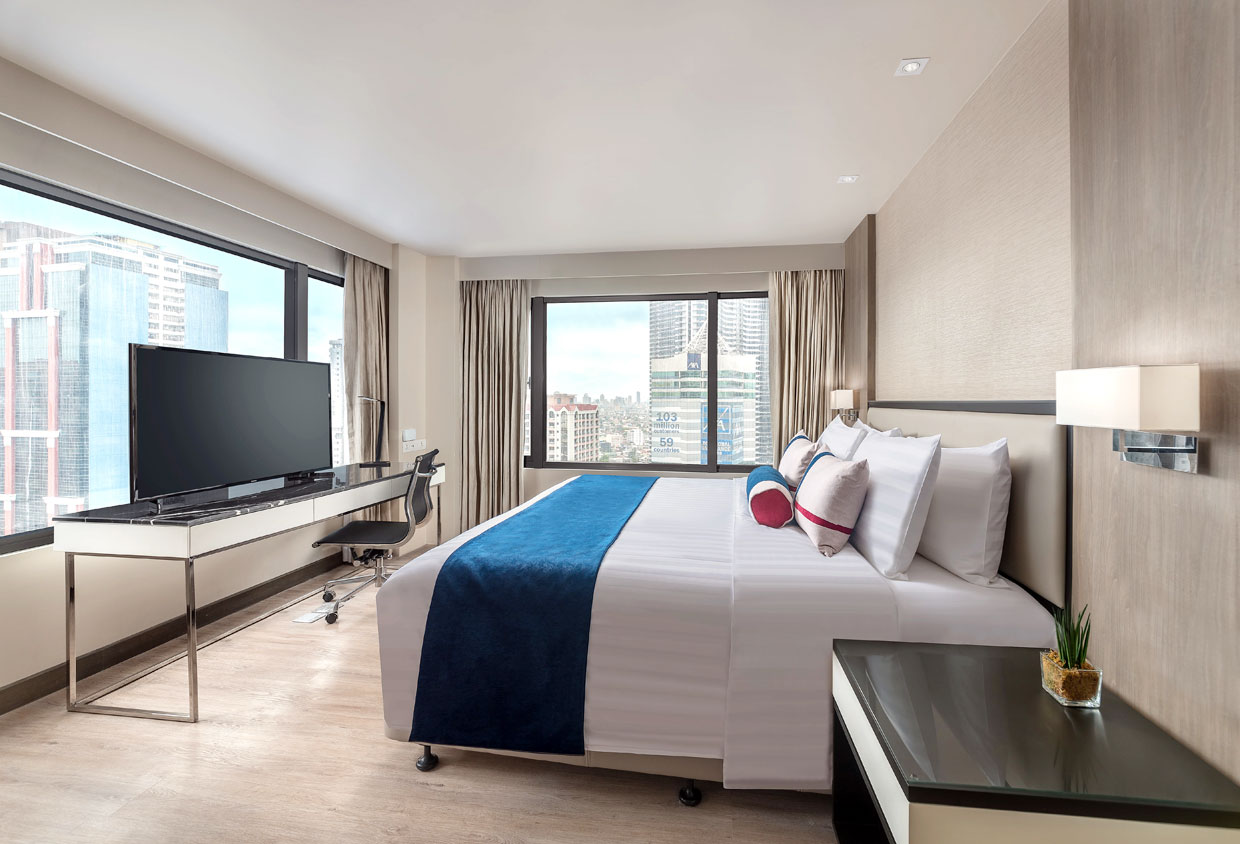 The Studio Premier room also has a kitchenette and ranges from 31 sqm. to 43 sqm. The biggest is a two-bedroom from 93 to 108-sqm.

“I like using the term ‘cute’ because that’s how it feels compared to the other hotels I’ve worked at around the world which have sprawling big lobbies. Here, it’s all in one line straight line — you just take the elevators up, you have the lobby, the pool and gym, the guest rooms, the bar the restaurant. It’s a cute little box.”

Marc has been very much at home in Makati since he came back from working in luxury hotels in Hong Kong, Japan, the UK, China and Switzerland. But it was in Manila where he got his early start in the business.

His father Miguel Cerqueda was general manager of The Manila Hotel for almost two decades during the hotel’s heyday and he placed Marc in summer jobs in the various departments when he was 11. This was something the elder Cerqueda experienced with his own father, who made him work in their hotel in Andorra when he was a young boy. Miguel was later sent to school in Switzerland where he met his Filipino wife.

Marc says, “Both my grandfather and father really drilled into me a ‘hard work ethic.’ They continuously stressed to me at an early age that ‘efforts and sacrifices need to be made before anything is achieved.’”

He adds that growing up in hotels exposed him to “a very transient environment of people constantly coming in and out, which taught me to be observant of different types of people, their needs, their likes and dislikes, and desires. This I believe has benefited me in my current role as hotel GM.

The swimming pool on the 19th floor has sweeping views of Makati and beyond.

“My brother and I as kids were reminded that even though we lived in the hotel, the hotel was not our home — we needed to be respectful  and mindful of the true tenants: the guests. At The Manila Hotel, I had the privilege of meeting through my father some celebrities such as Liza Minnelli, Sammy Davis Jr., Andy Williams, the Village People, Donna and Marie Osmond.”

The best lesson his father taught him about the hotel business and about life is “respect and humility — that hospitality and life in general can be best experienced by guests and colleagues alike when these two personality traits are consistently displayed.”

Working around the world has given him some fond memories too, such as being there as the restaurant manager when they shot Notting Hill with Hugh Grant and Julia Roberts in his restaurant’s gardens; meeting Keanu Reeves in China who stayed several nights in his hotel while promoting a film; and in Japan where his hotel hosted the Emperor and Empress of Japan.

When Marc came home to the Philippines, he joined El Nido Resorts of Ten Knots for four years. “I loved it, really enjoyed it. I had been in in the hotel business since I was 18 years old with Mandarin, Hilton, Hyatt and Intercontinental, and wondered why I hadn’t joined a resort sooner,” he says with a laugh.

He says working with a Filipino brand like Seda at a time when more international hotels are coming into the country is an advantage. “We can maximize on the legendary Filipino hospitality because it’s in our character as a nation, as a people. You ask any traveler who comes here and they will always talk about how they’ve never been to a friendlier country in the world, where everybody smiles, where they are so talkative and happy. 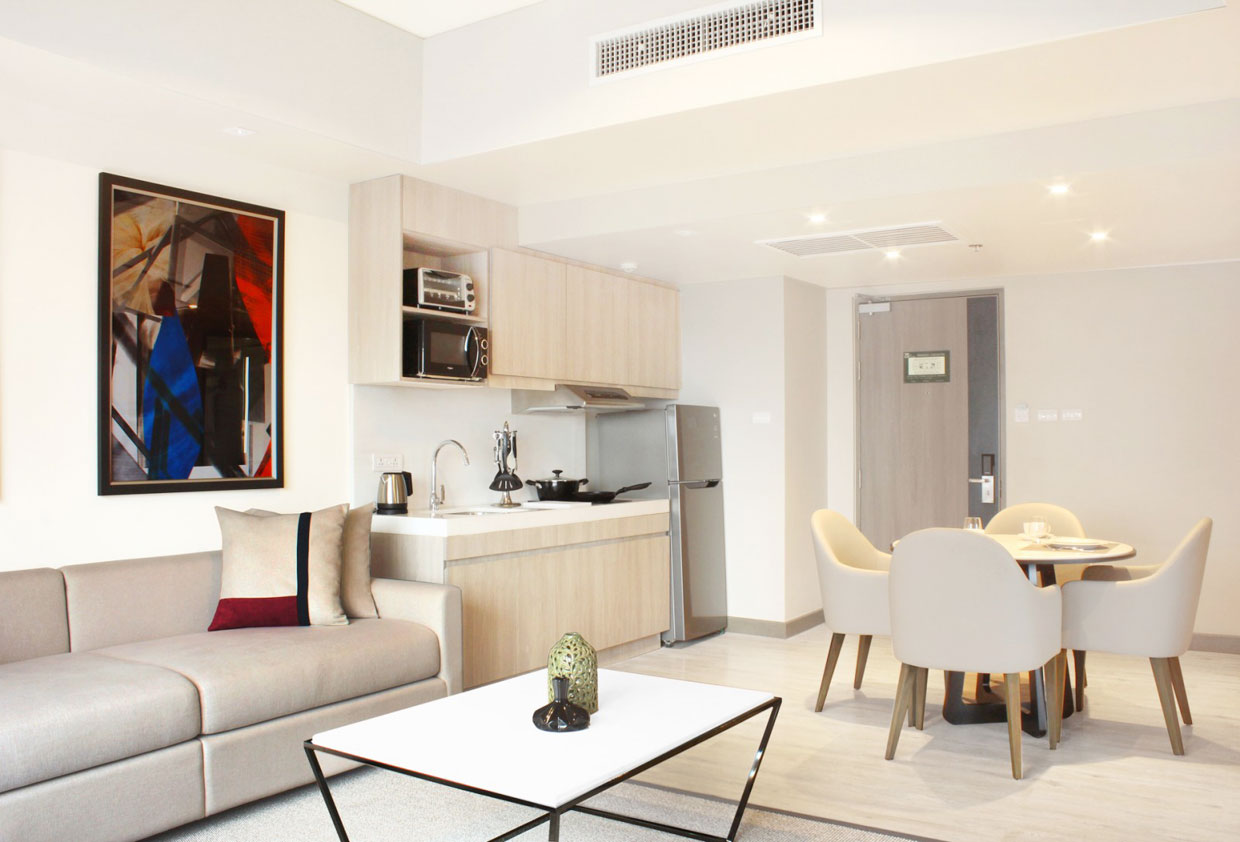 Living and dining area of the one-bedroom at Seda Residences Makati. Rooms range from studios to two-bedroom flats.

“Filipino corporations know what the Filipino market requires — which is real, true friendship and warmth. They require interaction, Filipino food that’s delicious, they require comfort, they require cleanliness more than other markets. There is a lot that Seda Hotels as a brand can illuminate to international brands about service from the heart and hospitality that truly treats guests as guests in our own homes.”

Franke: More than 100 years of exquisite craftsmanship
Scroll to top