Located at 6747 Ayala Avenue, the last plot of real estate on the country’s most expensive street, the Foster-designed condominium will be the most expensive per square meter when it is completed in 2023.

What do architect Norman Foster and the Beatles have in common? They’re British icons loved the world over for their design and music, respectively.

But there’s more: Foster was included in Sir Peter Blake’s recreation of his 1967 Beatles album cover “Sgt. Pepper’s Lonely Hearts Club Band,” which originally featured James Dean and Marilyn Monroe. In 2012, Blake created a new artwork featuring the people he admired and Foster was one of them, as well as JK Rowling, Alexander McQueen, Amy Winehouse, the Monty Python foot (yes, just the foot, not the whole gang!), Noel Gallager and 72 other cultural figures that inspired Blake. 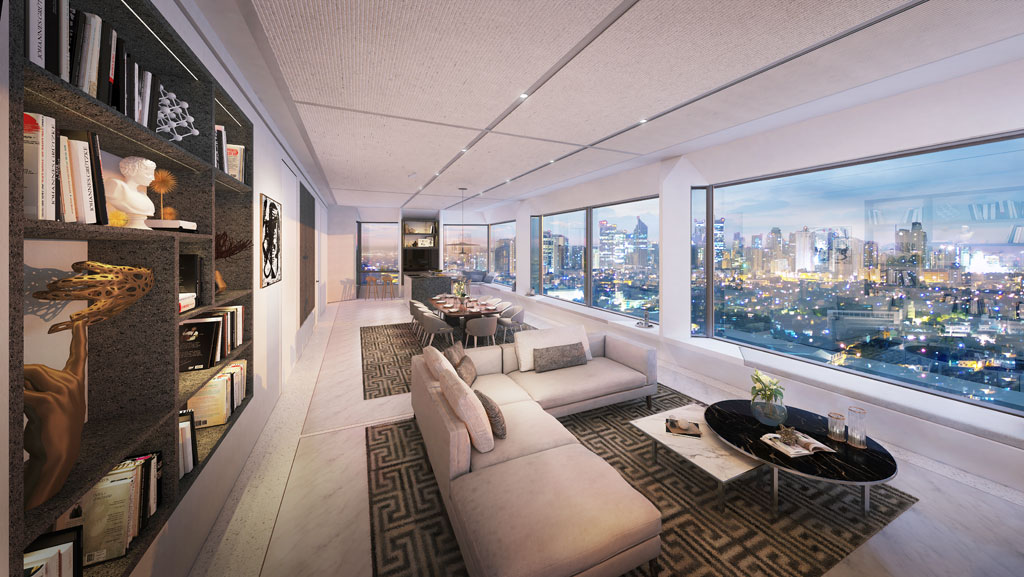 The Estate’s Lifestyle unit living room views. The Estate is a joint-venture project of Federal Land and SMDC.

On Monday, Oct. 21, the theatrical production Let It Be: A Celebration of the Music of the Beatles will be held at the Grand Hyatt Manila, exclusively for buyers, agents and investors of The Estate Makati, a residential condominium designed by Foster + Partners, led and founded by Norman Foster.

The Estate is a joint-venture project of Federal Land and SMDC. This is not the first time the Ty and Sy families have jointly built a residential condominium. Their first joint venture was The Ritz, also on Ayala Avenue and hailed as a modern, innovative building when it was launched in the 1980s. 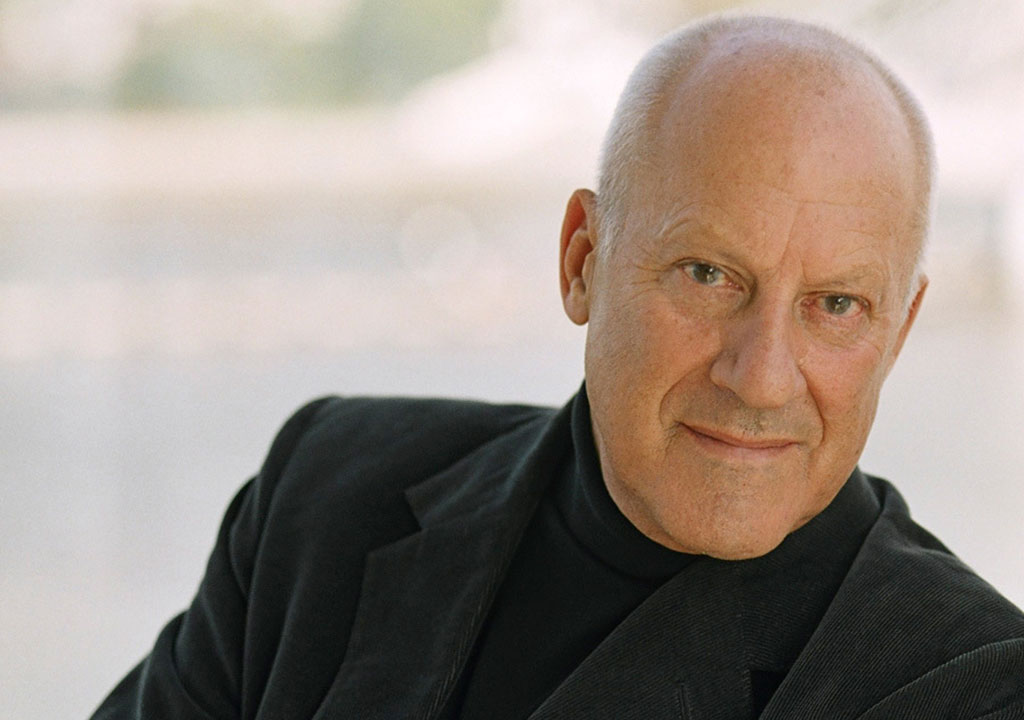 Norman Foster, founder of Foster + Partners, the architectural firm that designed The Estate.

The Estate is a luxury residential high-rise being constructed at 6747 Ayala Avenue, the last plot of real estate on the country’s most expensive street per square meter, and when it is finished it will be the most expensive condominium in the country.

Both Foster and The Beatles are also favorites of Federal Land chairman Alfred Ty, who saw Let It Be on London’s West End and so enjoyed it that he decided to bring it to Manila for a one-night show.

Let It Be begins with The Beatles’ performance at Liverpool’s Cavern Club in 1962 and follows their journey to the US beginning on The Ed Sullivan Show until the group’s breakup in 1970. The show was first mounted on West End in 2012, was brought to Broadway and has toured the world, including Japan where the performers were last week when typhoon Hagibis made landfall in Tokyo. 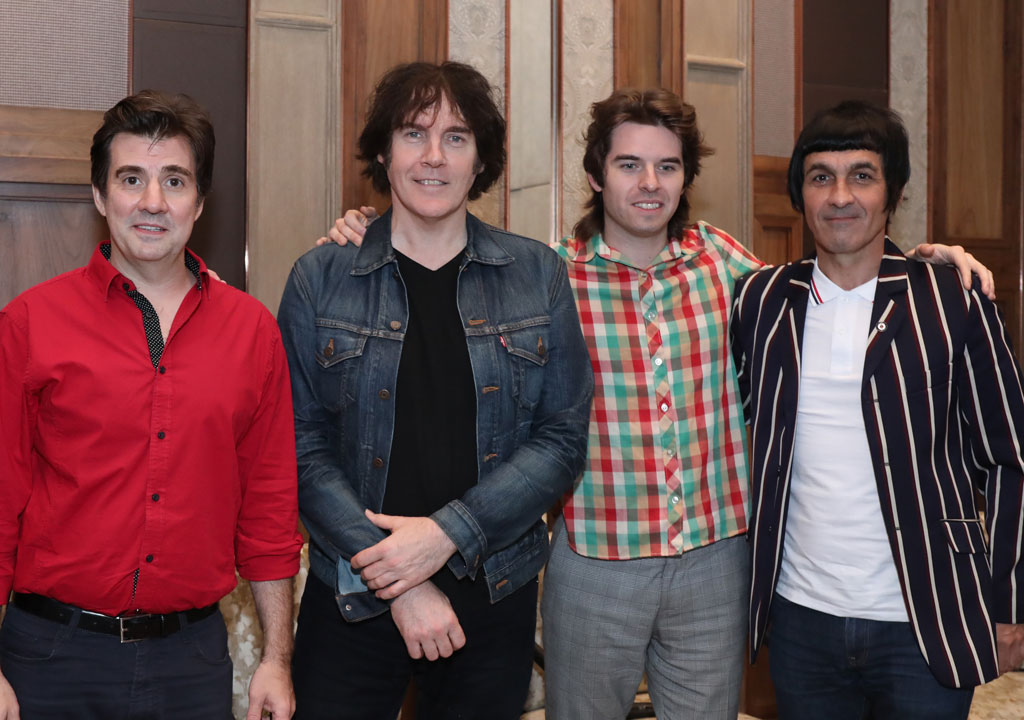 Let It Be: A Celebration of the Music of the Beatles: Chris Mc- burney as Ringo Starr (drums), John Brosnan as George Har- rison (guitar), Niel Candelora as Paul McCartney (bass), and Mi- chael Gagliano as John Lennon (guitar). The group is mounting a one-night-only show for The Estate’s buyers and investors on Oct. 21 at The Grand Hyatt.

Michael Gagliano, the actor who plays John Lennon, said during the presscon on Thursday that he was on the ninth floor of his hotel during the typhoon last Saturday. It was their fourth time to perform in Japan and he added that Let it Be has been seen by two million people around the world.

The present iteration (it was revamped in 2016 and the West End version differs a little from Broadway’s) features faves from the Beatles career and an all-new second half that “imagines a world in which the Beatles are reunited.” 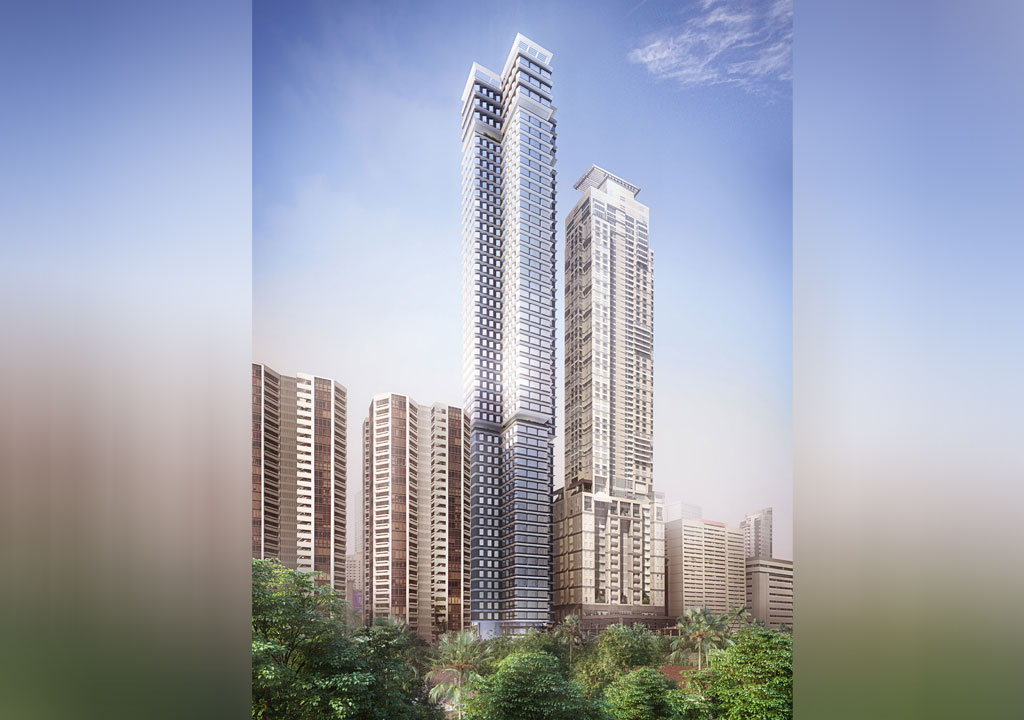 The Estate at 6747 Ayala Avenue, Makati

Songs include Hard’s Day Night, Day Tripper, Sgt. Pepper’s Lonely Hearts Club Band, Twist & Shout, Get Back, I Wanna Hold Your Hand and Strawberry Fields, and a reunion that everyone was hoping for.

The actors of Let It Be say they’re not just performers, but also “massive Beatles fans.”

They’re fans of Norman Foster as well, saying the architect’s well loved for his designs in London, especially for The Gherkin or, more formally, the 30 St. Mary Axe commercial building, standing at 41 stories in the city’s financial district since 2004. 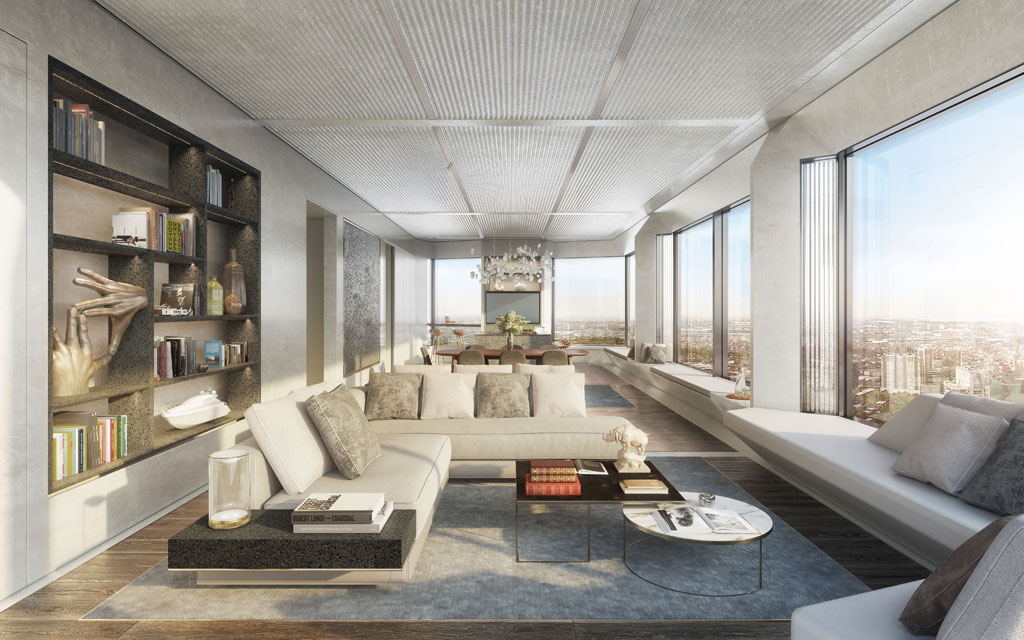 How did The Estate choose Foster + Partners? Pascual M. Garcia III, president of STRC, the joint venture company of Federal Land and SMDC, said at a recent media roundtable, “We shortlisted popular names in the industry and looked into those whom we felt perfectly matched our vision and philosophy for the project. It wasn’t a difficult decision to choose Foster + Partners. Their work spoke for itself! They have at least one landmark project in every major city in the world, and we thought it’d be great to add Makati to the list.”

That’s the thing about Foster’s designs – people who travel have at least seen or been in one of his buildings, and paused and said, “Hmmm.” 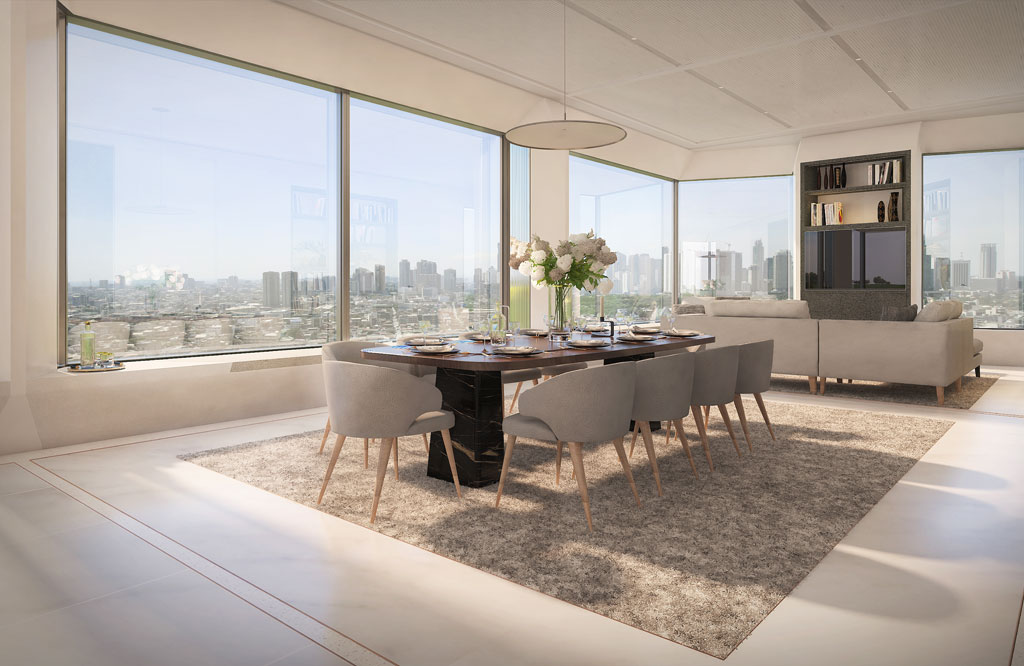 Dining room with sweeping views of the country’s financial district.

Foster was responsible for the dome of the redesigned Reichstag in Berlin, which houses the German Parliament; the HSBC Building in Hong Kong; Apple Park, Apple’s headquarters in Cupertino; the Great Court at the British Museum; Chek Lap Kok or Hong Kong International Airport; the SEC Armadillo in the UK (yes it’s shaped like an armadillo, just as the Gherkin is shaped like a pickled cucumber).

The Estate Makati will be Foster’s first project in the Philippines. Locally, they are working with Coscolluela & Partners. 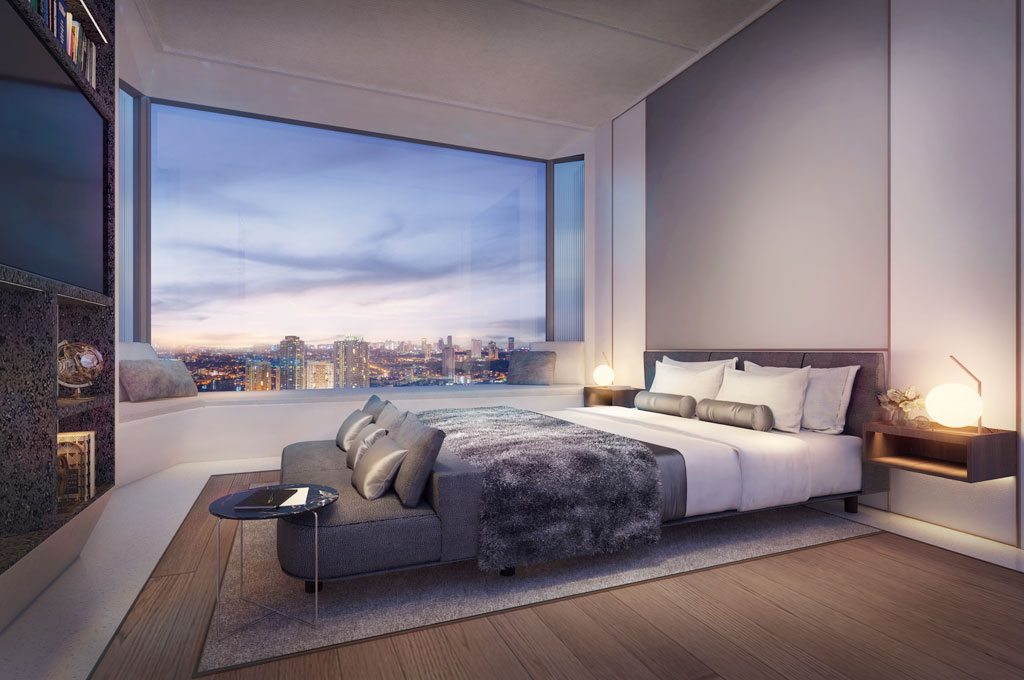 Master suite in a Legacy unit

Like other Foster designs, The Estate will undoubtedly be a head-turner and a great addition to Manila’s skyline, which frankly has too many nondescript buildings.

In fact, The Estate was recently awarded as the Best in Luxury High Rise and Architectural Design categories at the Japan International Property Awards (JIPA) held in Tokyo, Japan. 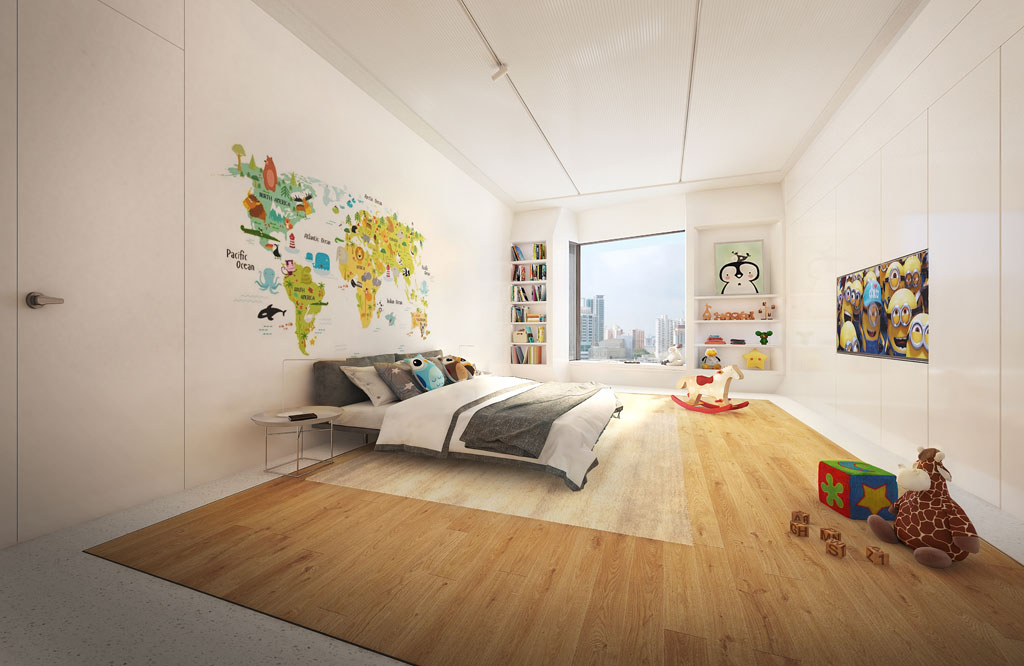 Garcia continues, “We are very proud The Estate Makati bested other properties around Southeast Asia.” The award is given to developers whose projects stand out for their outstanding expert workmanship, quality use of finishing for all appliances and fixtures to achieve its luxurious feel, and exceptional and expert architectural style. Foster + Partners has designed the building, inside and out, with several one-off elements to boot for each unit as well as public spaces. 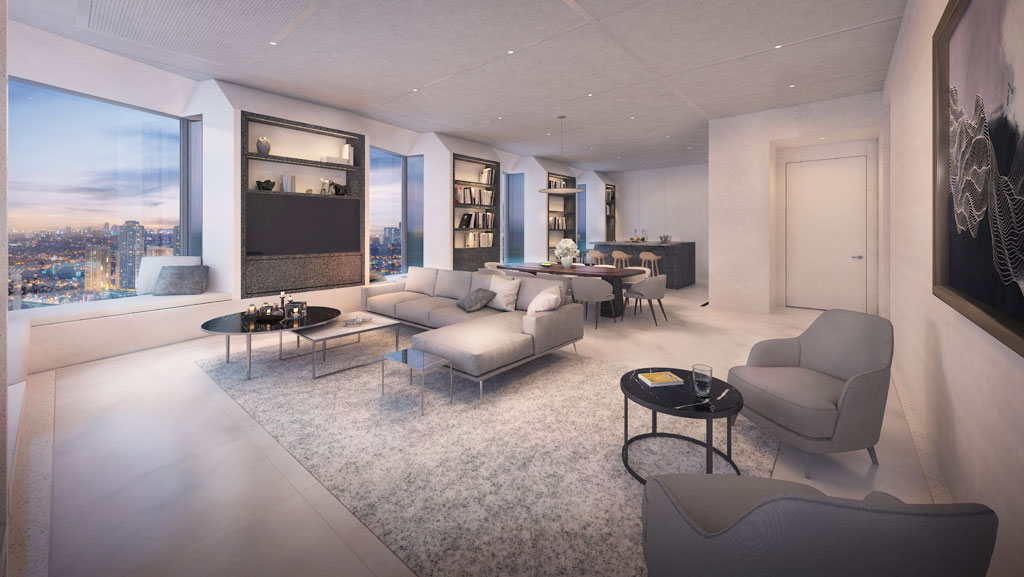 Living and dining areas in a Legacy unit

For more information on The Estate Makati, visit www.theestatemakati.com. For Let It Be tours, visit www.letitbelive.com.

Enjoy a snowy Christmas every weekend at Evia Lifestyle Center

A British celebration for The Estate Makati