From grimy to green.

That, in a nutshell, is the drastic transformation that Manila will undergo if its chief executive will have his way. Mayor Isko Moreno grew up in the slums of Tondo and knew from boyhood that the city of his birth had become synonymous to urban decay. It is quite well-documented how he had made a living and even ate – literally – from its filth. Perhaps, it was those early experiences that compelled him to dream of a different Manila, one that is spic and span and restored it to its much-vaunted former glory.

Days after taking office last June, the man many refer to as “Yorme” went on a clean-up blitz that electrified observers. Who would have thought anyone could unclog Divisoria of vendors that had spilled over from the sidewalks and suffused its streets? We saw it all unfold via Facebook Live, as he did the same with similarly congested commercial areas such as Carriedo and Quiapo. The unthinkable was happening. Though it may be debatable if the results of such efforts have been consistently sustained, they nevertheless heralded a new chapter for the city long vilified for its dingy reputation. 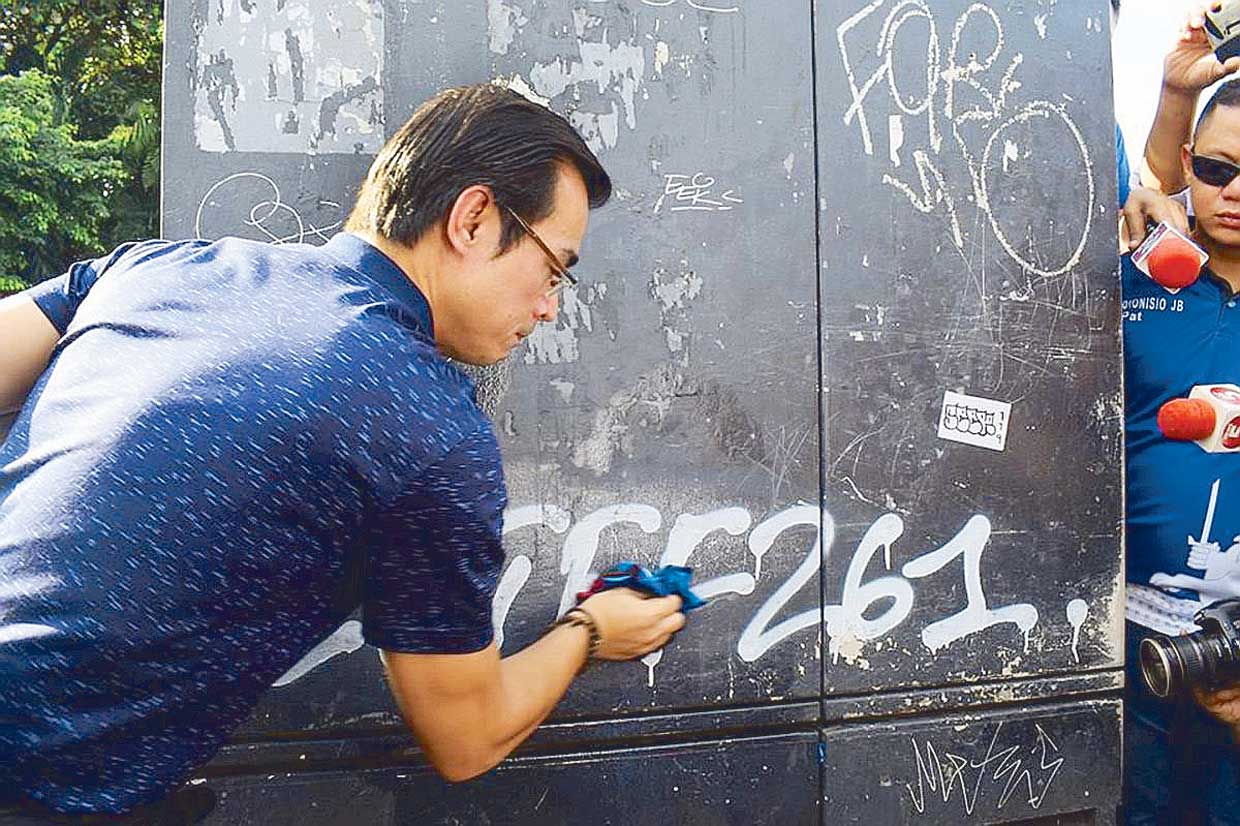 Cleaning up Manila: The “Yorme” of Manila tackles vandalism head on. Photo from the Manila Public Information Office

Since emerging triumphant in the heated elections pitting him against two former mayors, Moreno had been laying out a vision for Manila that seemed far-fetched. Video clips posted on his Facebook page revealed such initiatives as the Divisoria Street Vendors Program where sellers would ply their wares in two-story structures neatly lining Recto Avenue.

Still in a video, a Manila City Walk would thread together main attractions such as the Rizal Park, Intramuros, the National Museum, City Hall, Metropolitan Theater, Plaza Lawton and the Central Post Office through an elevated pedestrian walkway (think New York’s High Line) with dedicated bike lanes. Further, a modern City Hall is envisioned to rise in that expansive area between the existing one and Metropolitan Theater, in a dramatic conversion into a new Civic Center. 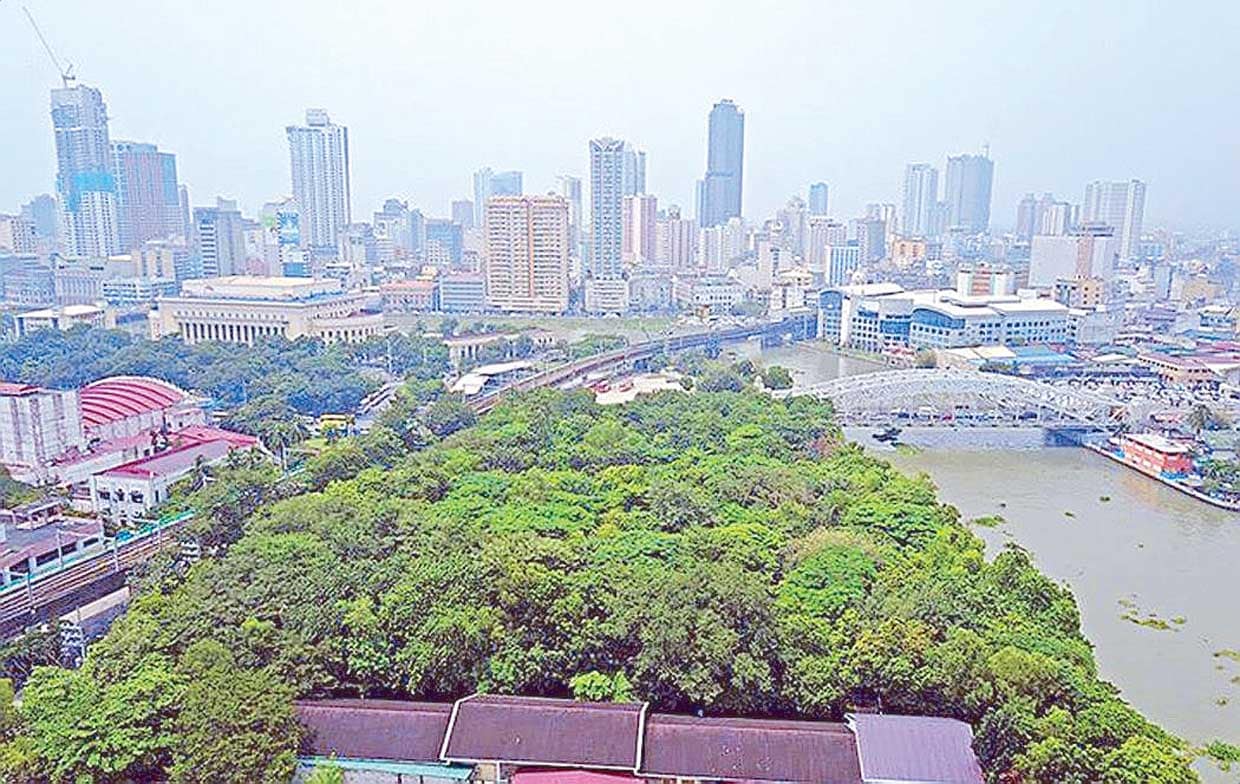 The Arroceros Forest Park, which in February was declared a permanent forest park, provides a striking contrast to the Manila skyline and will help boost its bid to be a green city. Photo by Paulo Alcazaren

The projected City Walk would extend to the Escolta, yesteryear’s “downtown,” to be connected from the Post Office side through a foot bridge. Moreno has shared that the refurbished Escolta – running parallel to the Pasig River – will be turned into a retail and leisure hub akin to Singapore’s Clark Quay.

One of the most ambitious plans is to convert the old Pandacan Oil Depot into the Pandacan Green City which, in the video rendering, looks like Bonifacio Global City (BGC) transplanted into Manila’s midst (although it is said to have been modeled after Rockwell Center in Makati). This new business district will be comprised of mixed-use condominiums, wide open green spaces and a so-called Buling Buling Centro which is tied in to the religious and cultural festival held in honor of the Sto. Niño every January in Pandacan.

The development, curiously, is intended to integrate dwellings for various social strata. For while there will be luxurious high-rise condos for the moneyed, there will also be in-city vertical residences for Manila’s indigent families reminiscent of Marcos-era BLISS housing complexes. 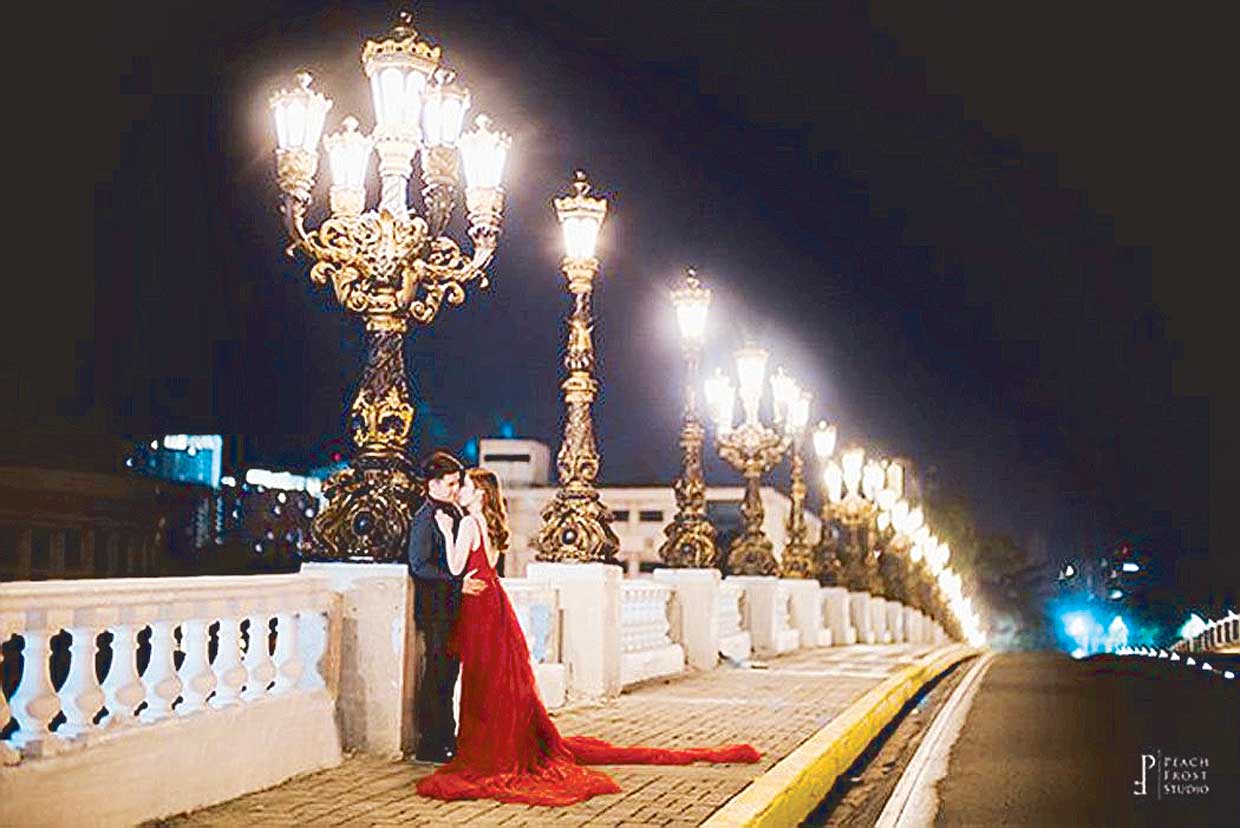 Prenup photos of the couple Meyrick and Bernadine include this one taken on the newly rehabilitated Jones Bridge, which went viral and was even shared by Mayor Isko Moreno on his official Facebook page. Photo by Peach Frost Studio

Obviously, such a massive metamorphosis will not happen overnight. Groundwork — let alone completion — for this kind of development may not even happen in a single three-year mayoral term. But Moreno seems to be of the “If you build it, people will come” mentality, and many of his actions in the months since assuming office are apparently geared towards achieving that. Apart from the livestreamed clean-up campaigns, his team has been at work on improving or preserving existing assets.

In November, for instance, Moreno, along with Vice Mayor Honey Lacuna, led the inauguration of the rehabilitated Jones Bridge that connects the city’s two oldest settlements — Intramuros and Binondo. With Jerry Acuzar of Bataan’s Las Casas de Acuzar heritage resort as consultant, the bridge was fitted with lampposts in pre-war designs. Two of four sculptures, collectively known as La Madre Filipina, were installed for the inauguration. One is a replica of a sculpture destroyed during World War II and the other, is a pre-war original by Ramon Martinez transferred from Rizal Park to the bridge — the latter covered by a memorandum of agreement between Tourism Secretary Berna Romulo Puyat and Moreno.

The fanfare over the “new” bridge (originally designed by architect Juan Arellano), which included a fireworks display, was effective in drawing people to the suddenly Instagram-worthy location. The lamps provided a dramatic backdrop, as did the imposing Post Office building in the distance, such that people would come in droves for that photo-op on a bridge, even at night, when before they probably wouldn’t consider crossing it on foot much less linger on it due to security concerns. The Facebook-savvy Moreno reposted a couple’s pre-nuptial shoot on Jones Bridge, enjoining others to see it too. 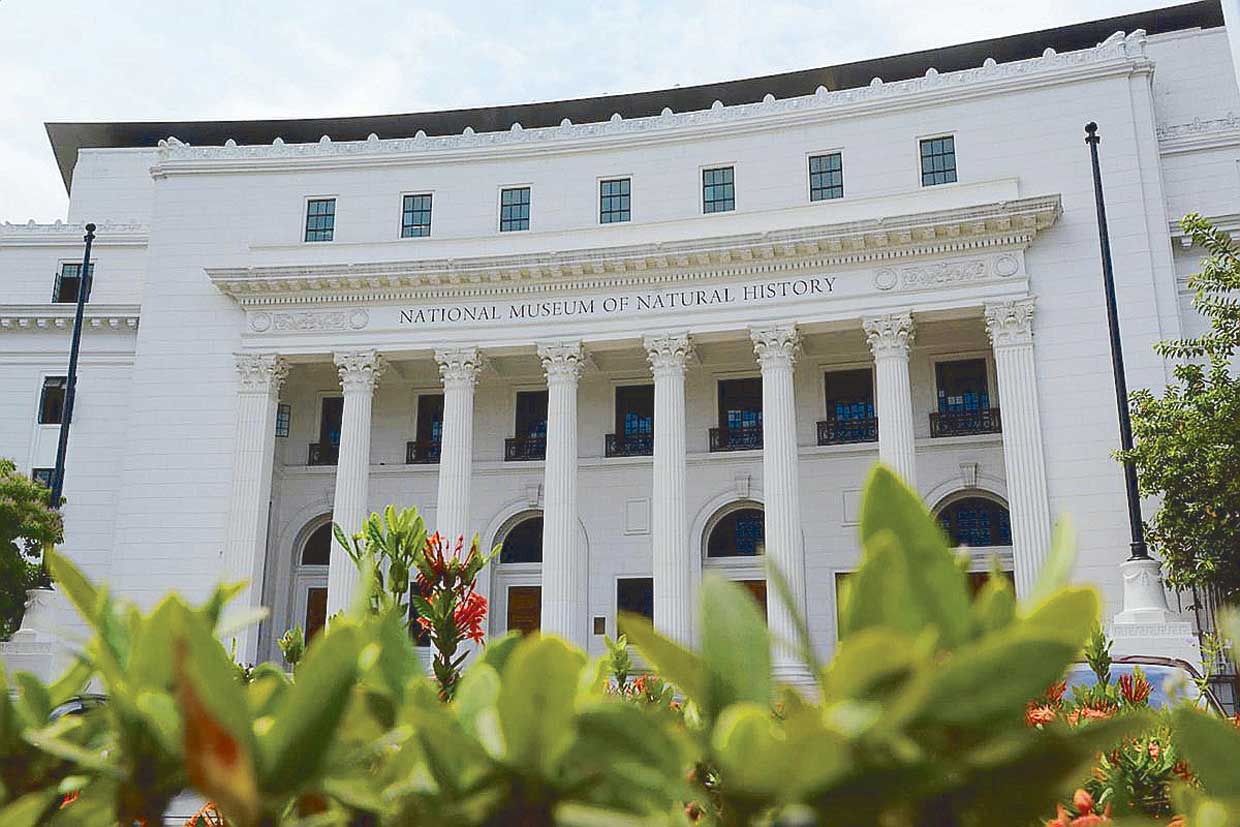 In January, Moreno focused attention on a “jewel of Manila” when he visited the Metropolitan Theater, another Arellano landmark in the Lawton area that had gone to seed. The National Commission for Culture and the Arts (NCCA) bought the 88-year-old theater from the Government Service Insurance System in 2015, and the once famed performing venue has since been undergoing rehabilitation.

Inside, as shown during Moreno’s visit, the theater’s architectural details were spruced up while new chairs were installed. Moreno, who hinted at a tentative opening for the venue in May, told project handlers, “Kung hindi niyo rin naman kayang ayusin, i-maintain, ibigay niyo na lang samin, ime-maintain namin (If you can’t fix it or maintain it, just give it to us and we will maintain it).” It is not clear, though, what shows are being planned for the theater that once hosted classical concerts, ballet and opera, and in its waning years, a musical variety show.

In another move that hogged headlines last month, Moreno sought to preserve the “last lung of Manila” by signing Manila City Ordinance No. 8607 which declares Arroceros Forest Park as a permanent forest park. Located near City Hall and the Central Station of LRT 1, the 2.2-hectare site is home to over 3,000 trees of 61 varieties and 8,000 ornamental plants as tended by its caretaker for 20 years, the Winner Foundation.

Reported to be under threat from past administrations that wanted to build unrelated facilities inside, the park will now be allocated P1 million for operation. (Manila’s PIO did not specify whether this was the monthly or yearly budget.) A governing committee will, meanwhile, be organized to develop plans for the park “consistent with the principles of sustainable development and the right of the people to a balanced and healthful ecology,” as indicated in the ordinance. It is being eyed as a venue for environmental education and nature appreciation.

The Arroceros Forest Park will figure prominently in Manila’s Five Parks Pedestrian Corridor Masterplan as it will also be made accessible to transportation hubs, including the newly invigorated Pasig River ferry service system with a planned station behind the Central Post Office. It will also tie in with a planned esplanade that will stretch from Ayala Bridge to Intramuros, all aimed at making Manila a green and walkable city.

Moreno’s can-do approach, aggressively covered particularly during the first months of his administration, has earned him not just praise also pledges of assistance from many quarters. Ambassadors from various countries have offered cooperation in such areas as urban planning, increasing green spaces, garbage collection, river rehabilitation and flood management.

He’s also had casual meetings with business taipans, offering them incentives such as long-term tax breaks to entice them to consider Manila for setting up shop, or to build on existing ones, or to return and give it another chance. Asked during one such gathering what his stand was on reclamation (four huge reclamation projects were allegedly signed by the previous administration in so-called midnight deals), Moreno replied it was not his priority as he wanted to focus on inland development. He supports the national government’s plans for a Manila Bay rehabilitation — but without reclamation.

To convince investors to come in, the mayor knew he also had to reassure them that Manila is a safe, efficient and corruption-free place to do business in. This is probably why, alongside plans for a green city, his Facebook page has also been replete with accounts of ridding the city of criminal elements, cleaning up police ranks and local officialdom, and streamlining city procedures. Complementarily, positive news on local heroes, from honest citizens to achieving students, are similarly highlighted.

In any case, Moreno has generated such an immense amount of goodwill for his city that he has been receiving donations — from corporate checks to the savings of young children — to help implement his programs. As per a recent count, of course shown on Facebook, the kitty has breached P20 million.

In talking to the taipans to help in the makeover of Manila, Moreno was quoted as urging: “Tell everybody to come back to Manila. Just try. I know you got frustrated. You lost hope. Parang wala na. (It seemed hopeless.) There is no harm in trying… We really have to be better; you deserve better things from us. It is high time. The city government owes it to the people.”

How Tourism And Hospitality Have Been Impacted By Covid-19