There’s not a single cloud in the sky and everyone is in a sunny disposition as City of Dreams switches on its P76-million 1.2-megawatt solar panels at the rooftop of its parking building to become an industry benchmark as the first integrated resort in the Philippines to harness and utilize solar energy.

“It’s a milestone for City of Dreams and I’m very excited,” says a proudly beaming Kevin Benning, City of Dreams Manila senior vice president and chief operating officer. “Environmental sustainability is the core of our business philosophy and we are guided by the overall sustainability strategy of Melco under our chairman and owner Lawrence Ho, which is focused on achieving carbon neutrality and zero waste across our resorts in Asia and Europe.”

He adds, “This initiative in renewable energy is the latest in our increased sustainability undertakings to support the government’s efforts towards achieving sustainable development. We also hope that by introducing solar energy, we can inspire positive change and encourage others to take part in the ever-growing movement towards a more sustainable future.”

At this inauguration, there’s enough energy among the distinguished guests, COD staff, and media to light up the metro. As we enjoy a bit of sun from the roofdeck and take in a sweeping view of the City of Dreams, we’re dazzled by these facts and figures, to wit: The 3,120 solar PV panels (installed across two buildings, covering an area of 6,436 sq.m.) can generate almost 2,000 MWh per year, which is equivalent to the average power consumption of more than 7,000 typical households. The solar energy generated will reduce the carbon emissions of the COD complex by over 1,000 tons per year, which is equivalent to the amount of carbon emissions from 270 passenger cars. 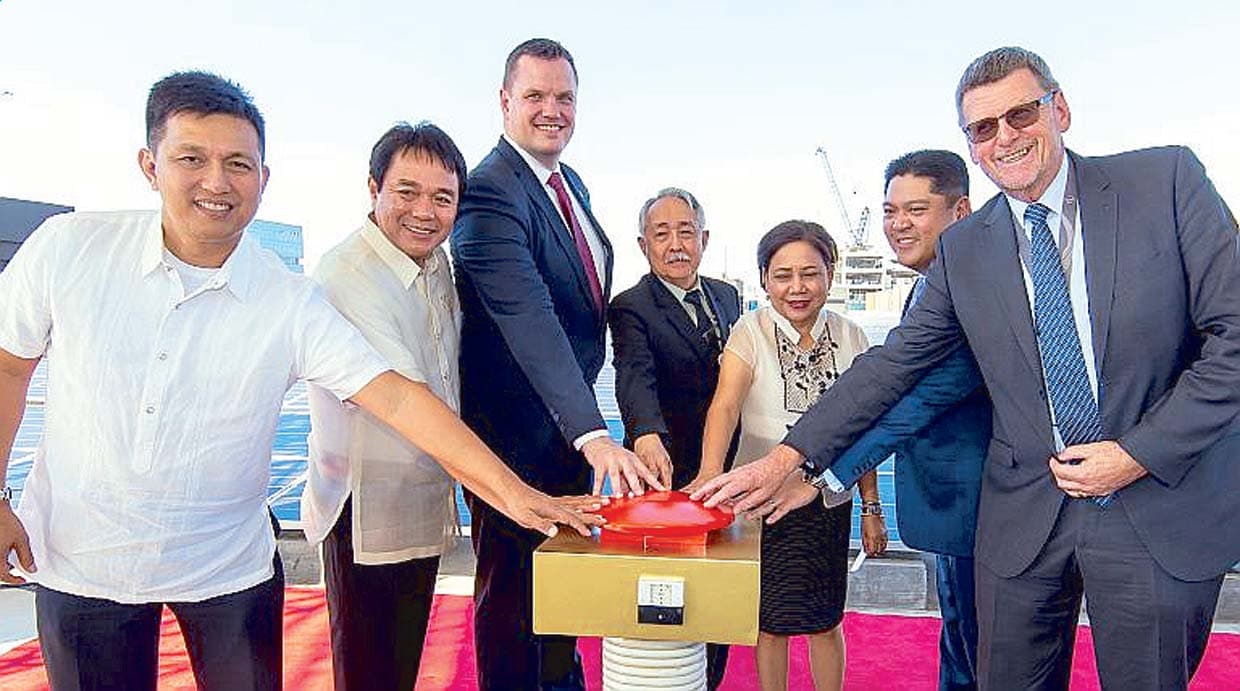 This installation, says Kevin, is actually focused on COD’s six hotel towers so 20 percent of the power that goes to COD’s hotels will all be produced here. “That’s just one of many initiatives where we’re involving our guests. We’re also communicating with them about our sustainability efforts — reusing your towels, reusing your sheets, and going away from single-use plastics. Prior to the Parañaque release of the single-use plastics ban, we already eliminated plastic straws and shifted to sustainable materials. And we’re excited that Mayor Edwin Olivarez and the City of Paranaque are ramping up that initiative even more as we reduce the single-use plastics on the City of Dreams property.”

So far, not a single guest has complained, they’ve been very supportive even as COD is also in the process of eliminating plastic bottles in the hotel rooms.

Look around you and something green amid the concrete jungle refreshes the eye: COD’s dream garden, where all the plants in the hotel are grown. Then you savor the aromatic scent of the herb garden, whose produce spices up your food at COD.

“All the calamansi that we use on the property are grown on this rooftop,” Kevin declares with a hint of pride.

And for your caffeine fix, you can be sure that you get only the finest coffee beans grown by our own farmers and freshly roasted in the COD kitchen.

“We’re a relatively new company (only five years old) and we’ve been implementing different programs over the last five years,” says Kevin. “But in the last two years, we’ve really ramped up our efforts under Michael Ziemer, VP for Hotels and Food & Beverage, and myself. We’re both passionate about sustainability initiatives and where we’re moving in the future. Our chairman Lawrence Ho has pledged that we will be fully sustainable by 2030. Macao, San Francisco, and Manila have implemented solar initiatives, which is a great start for COD.”

All these initiatives can only mean significant savings for COD. Millions of dollars worth of savings!

Sharing this dream with the City of Dreams is its power partner Spectrum, the renewable energy
subsidiary of Meralco. “COD’s renewable energy solution can generate power of up to 1,730 MWh annually, which is equivalent to 920,820 kilograms of carbon footprint reduction, very sizable numbers,” says Victor Genuino, Spectrum president and CEO and Meralco’s first VP and head for customer retail services and corporate communications.

The Spectrum head goes on to ask, “So, why did Meralco, a company whose core business comes from the distribution of electricity, set up this subsidiary that effectively reduces consumption?”

He replies, “The answer is very simple: Because our customers demanded it. Our customers are evolving, they’re becoming more conscious of their impact on diminishing resources and they want to do something about it. And Meralco, leveraging 116 years of expertise in the power industry, is in a unique position to provide our communications and industrial partners with strategic renewal solutions in building a more sustainable future, which we’re extending to our residential communities as well.”

Department of Energy’s Senior Undersecretary Jesus Cristino Posadas enjoins everyone, “Let’s move forward in pushing all boundaries for innovative solutions that will revolutionize the way we live, the way we work with our communities, and the way we build a better Philippines for future generations.”

Let The Sunshine In

Australian-based Paul Whatnell, GHD director of Building Engineering & Sustainability, agrees that the Philippines is absolutely blessed to have so much sun. “You also have a lot of cloud cover which doesn’t prevent the sun from working, but will significantly diminish the output. January is one of the lowest months of the year to produce electricity. It peaks in April because it’s summer. When it’s not sunny, it can drop down to 25 percent. You can collect solar energy in batteries, but we don’t do that here because we use more solar power than we generate.”

For now, the solar panels can generate the total power of three percent of the total consumption of the whole COD complex. “With the type of energy falling on these panels now, we were  able to convert 11 percent, which doesn’t sound a lot,” the techie Paul tells us. “Twenty-five years later, we’re able to convert 20 percent from sun to energy.  So, it’s almost doubled in 25 years. And it’ll probably double again in 10 years. Technology is getting better day by day.”

The solar panels will last about 25 years, diminishing in output by .3 percent each year. “After seven years  of use, we’ve completely paid,” Paul shares. “For the next 18 years, there’ll be no cost, only income.”

He clarifies, “It doesn’t mean that after 25 years, we have to throw this away. The silicon, aluminum, glass, screen, electrics can be reused for purposes other than solar panels.”

Paul himself lives in a house powered by solar energy. “Where I live (his hometown is Coromandel Valley, South Australia), we have more solar panels than anywhere else in Australia.”

COD is the biggest rooftop system he’s done; he has done bigger, but they’re all ground-based, with the whole ground area filled with solar panels.

City of Dreams may well be an ecologist’s dream come true.