Flashpackers love the boutique hotel because it’s cozy, romantic and homey with a rooftop bar from which to watch the most incredible sunsets while relaxing in a Jacuzzi with a drink.

I love that your first glimpse on Coron’s waters is the silhouettes of the limestone cliffs and mountain range against the morning light, hiding how heart-achingly beautiful they are in detail.

I’ve been here a few times before but each time feels like I’m seeing them for the first time. As if it’s my first time to snorkel in the coral gardens, swim with its marine life, get into the lagoons whose formations resulted from millions of years of underwater erosion, or hike up a ragged trail and down again to reach the most beautiful lake. 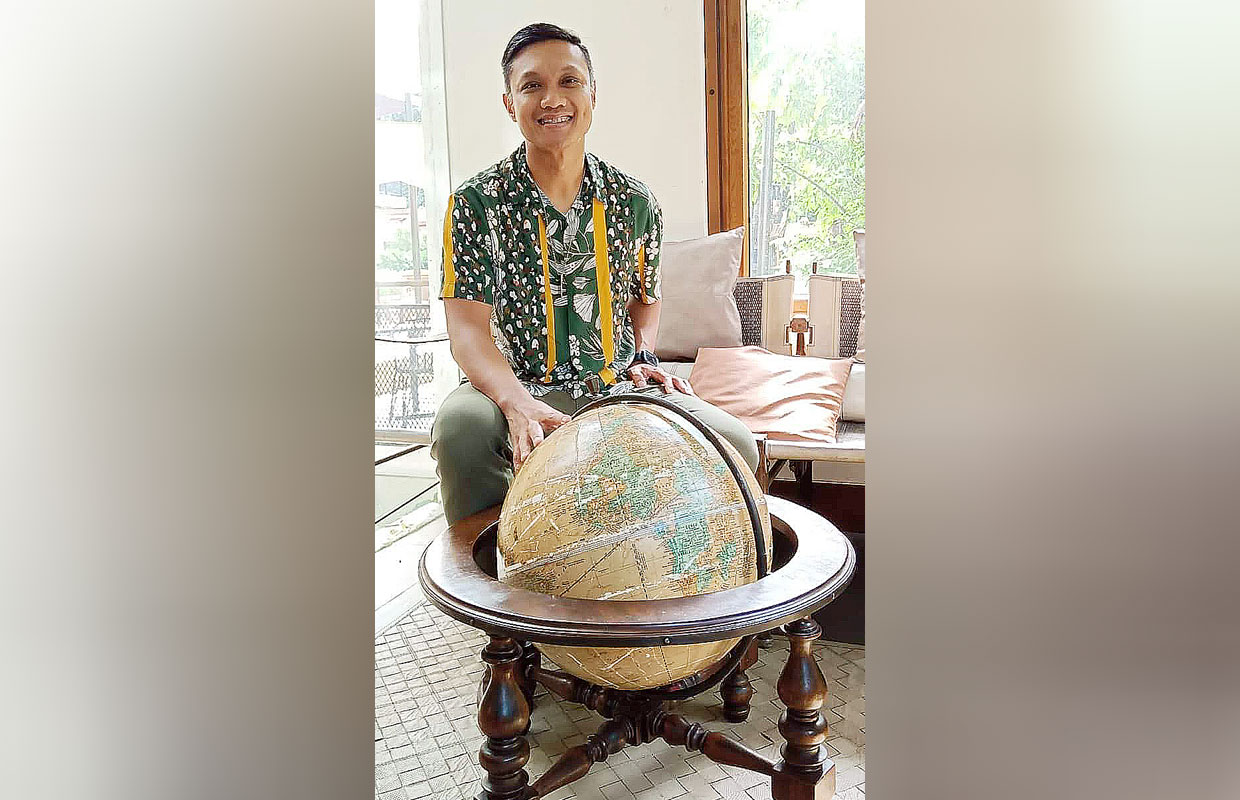 Lawyer Nikki Cauton III, CEO of One-Of Collection, which owns and operates The Funny Lion Coron at TFL’s fifth anniversary weekend: “TFL has a group of loyal guests, that’s why we decided to build two more in Palawan — in El Nido and Puerto Princesa.”

The sun blinds you on your way to the islands and when your eyes adjust and settle on the cliffs and emerald waters, you think: How can so much beauty be concentrated in one place?

Lawyer Nikki Cauton thought the same when he first went to Coron with his wife Ria Cauton many years ago. At the time there were only lodges and inns on the island, but one visit to Maquinit Hot Springs made them fall in love with the place and they decided to build a boutique hotel in Coron.

Nikki says, “Coron is beautiful and unique because it has so much variety — the shipwrecks, lakes, islands and safari. People should experience the Calauit island reserve, which is what makes Coron different.”

Sunset over Coron Bay from Pride Rock, the rooftop bar with Jacuzzis.

One such visit to Caluit with their kids gave them the idea of what to name the hotel. Their son Emilio, then four years old, was looking for a lion. When he was told there was none in the 3,700-hectare game reserve (but lots of giraffes), the boy said, “That’s funny, there’s no lion here.”

Thus The Funny Lion Coron hotel was built by Nikki and Ria, the couple that’s behind luxury resort Amorita in Bohol, which is owned and operated by their company One-Of Collection.

If Amorita was designed to cater to the luxury market, The Funny Lion was the natural choice of flashpackers — a breed of travelers that are more affluent than backpackers (travelers with flash!) but are not necessarily into luxury. 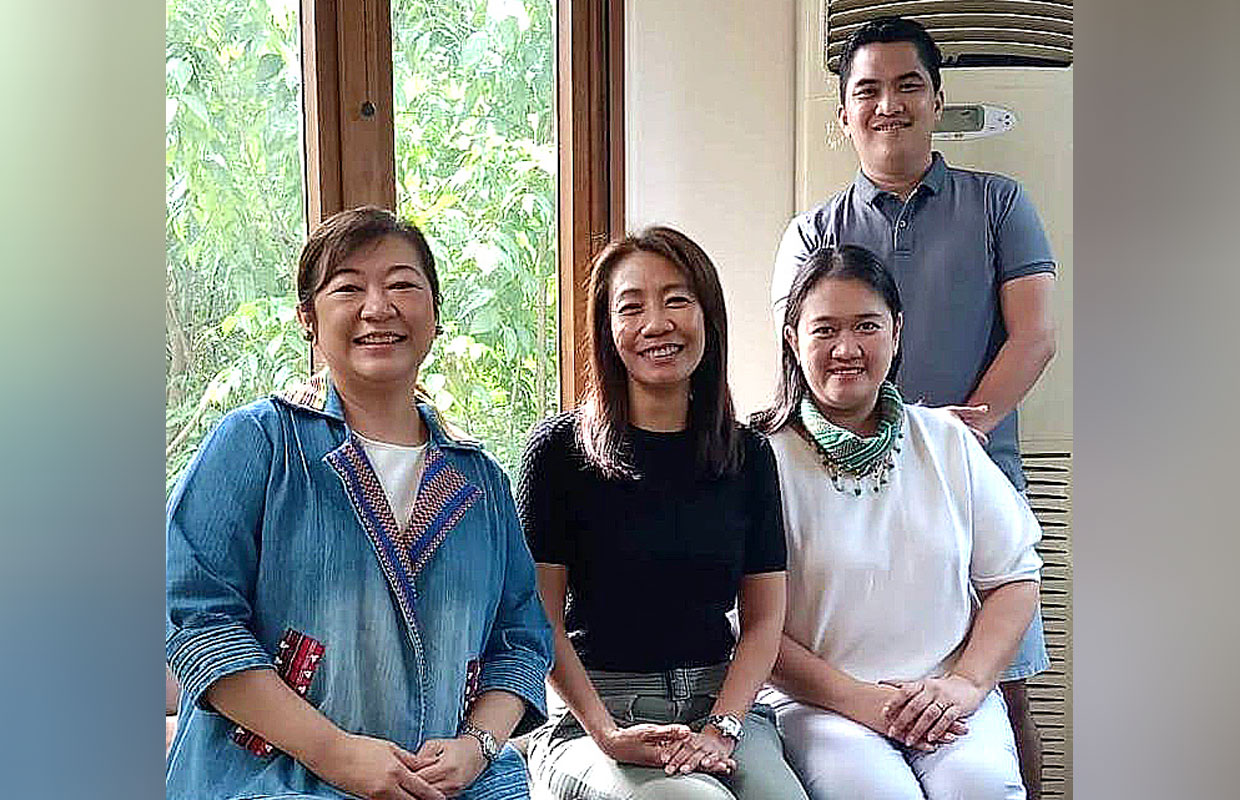 You can say it was the flashpackers that identified TFL’s market and shaped its demographic profile. And that was because of how the boutique hotel was designed — cozy, romantic and homey with a super rooftop bar from which to watch the most incredible sunsets while relaxing in a Jacuzzi with a drink.

During TFL’s fifth anniversary dinner with friends from Coron and Manila, Nikki says, “Flashpackers are tech-savvy travelers, usually 20s to 40s, who know what they want. They’re discerning travelers who want to experience local places and comfortable hotels.”

In keeping with the safari theme, TFL’s 31 comfy and well-appointed rooms are divided into three categories — Cub, King and Pride — and the drinks from the rooftop and poolside bars are a combination of local and international flavors. 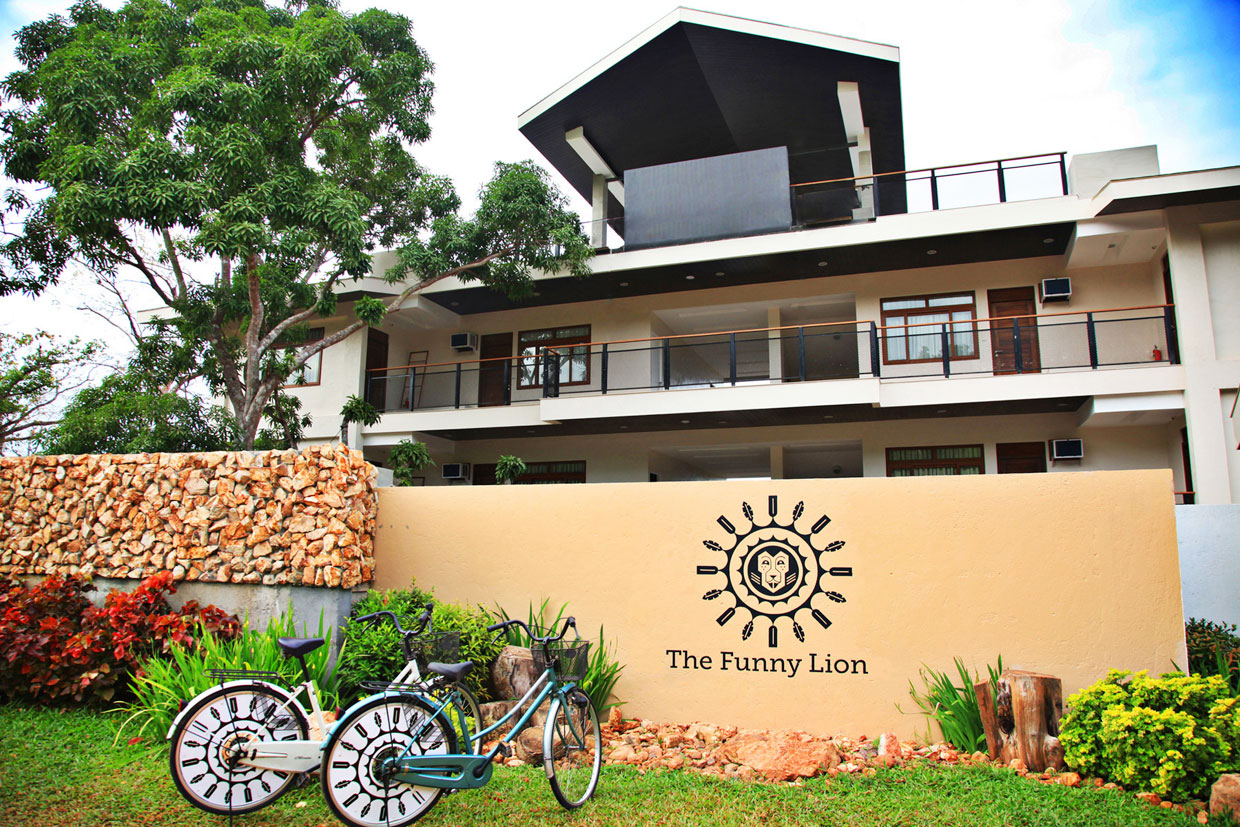 The Funny Lion Coron is a fave among flashpackers — travelers with more flash (or money) than backpackers but not necessarily into luxury.

Take the newest cocktail, for example. Named “Maldita” by resort manager Mike Mahinay and concocted by One-Of Collection chief operating officer Lyba Godio. It’s a drink with a Quatro Kantos gin base and sweetened calamansi because they needed more of the gin bottles to use for the toiletries in the rooms (they don’t use single-use plastics), which guests love so much that TFL began offering them as part of its merchandise line alongside water-proof bags to take island hopping.

“Whatever sustainable practice we did successfully in Amorita, we adopted when TFL opened. Our goal here is to have zero waste,” says Nikki. “The resorts have a lot of say in tourism and sustainability. Maybe when the bigger players see us doing our part, they will say, if this 50-room hotel can do it, why not a 400-room hotel?”

This practice, this philosophy extends to their CSR in Coron. TFL has a book-reading program for Grade 1 and 2 students. Nikki and Ria made sure that the reading materials included sustainability and the environment. 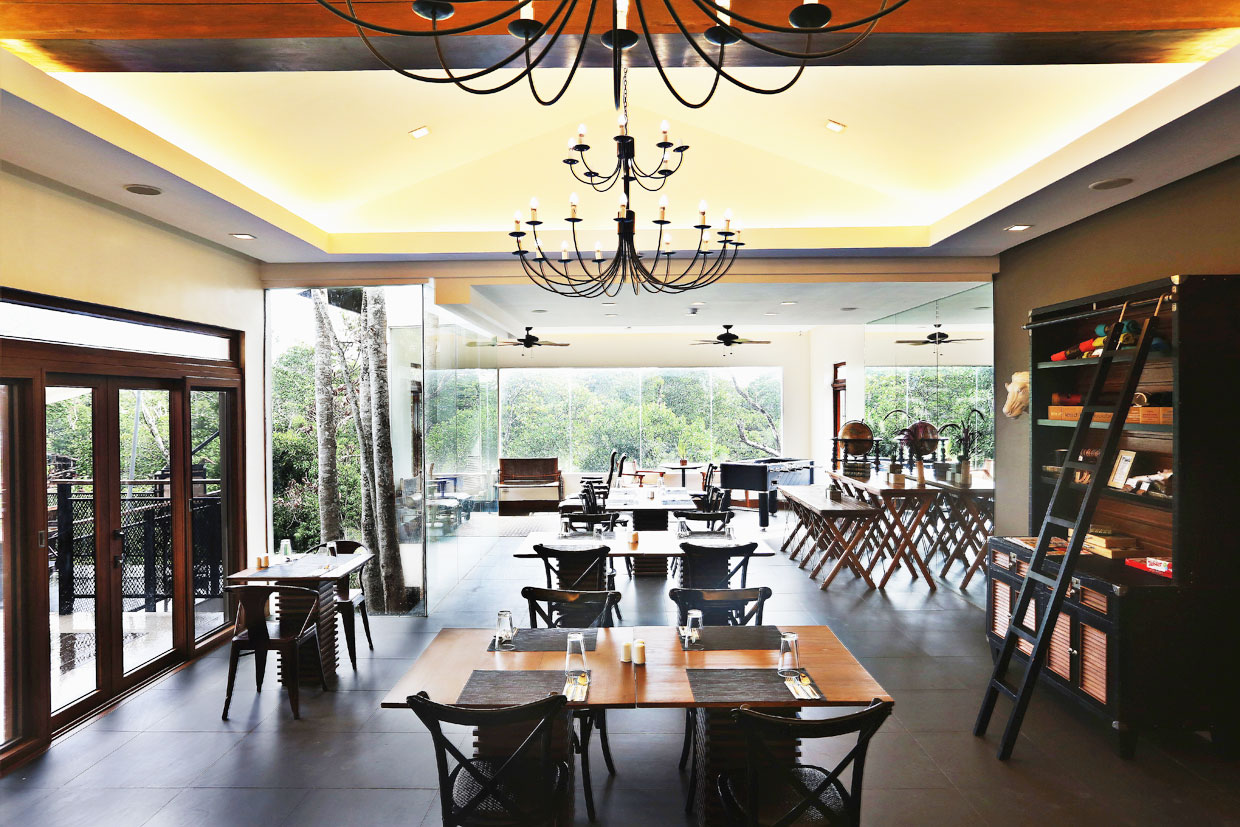 “Whenever we start a project, sustainability is a given and we’re also very much into education. We feel that young children need to understand the mangroves, recycling and environment,” says Nikki. “If they learn about these at a young age, it becomes automatic for them to recycle properly as adults because they can identify biodegradable materials from non-biodegradable.

“Also, we’re very much into nutrition, which is part of a young person’s holistic development. If you don’t feed the child well, it’s going to be hard for the brain to develop. We must give these kids a fighting chance.”

Nikki discloses that The Funny Lion is expanding in El Nido and Puerto Princesa. “TFL has a group of loyal guests, that’s why we decided to build two more in Palawan. We believe there could be a synergy between the three hotels — maybe fly via Puerto and go to El Nido and take a craft to Coron or vice versa. Of course each property can thrive on its own, but they can also be a circuit for travelers. 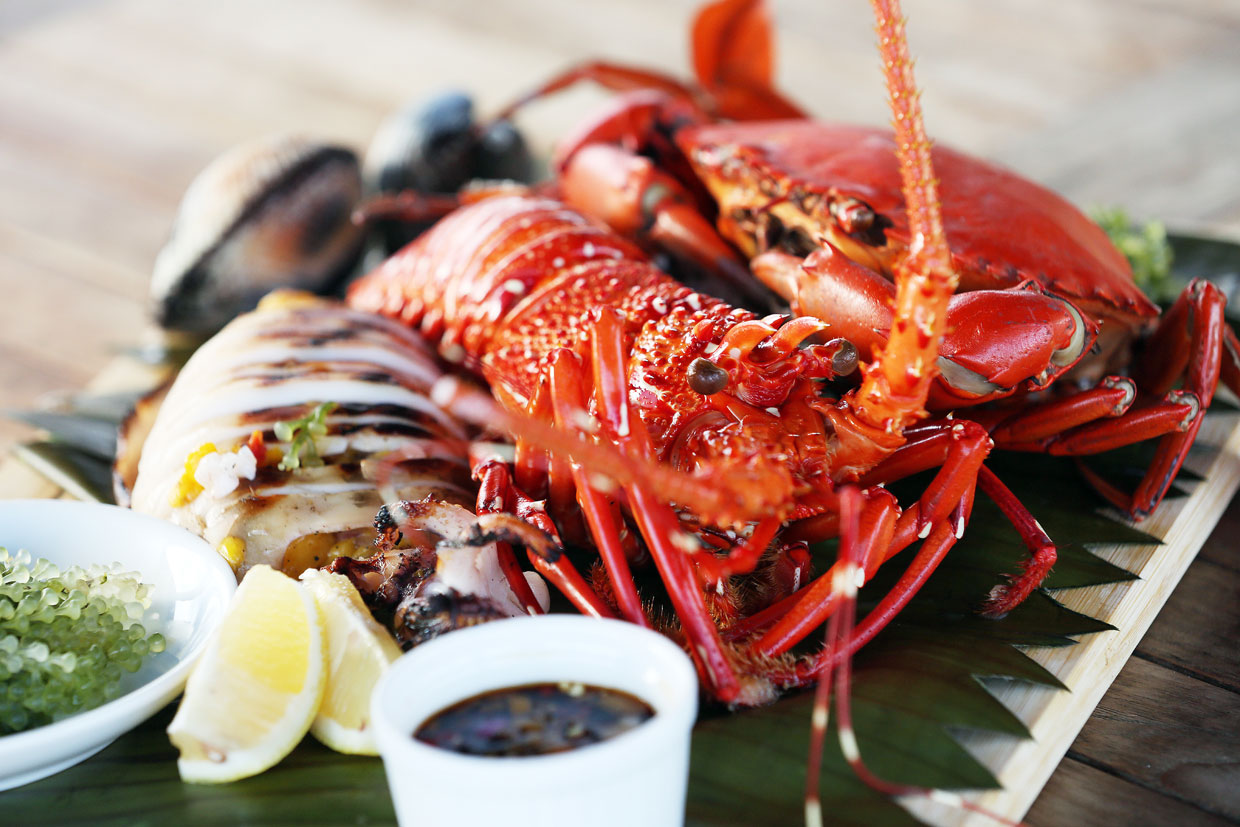 A seafood feast of squid, lobster and crab.

“We entered the market at the right time, five years ago, when Coron was picking up. Like Amorita in Bohol, our timing was just right. Coron is quaint and quiet still compared to El Nido — each has different charms but they can also cater to the same market.”

The 50-room TFL in El Nido features a design influenced by the limestone formations while the 70-room TFL Puerto Princesa is picking up the thriving art scene in its interiors. Both hotels will open in the second quarter of 2020.

Nikki sees the expansion of their brands as part of the company’s “obligation to the people who work for us. We want to give them opportunities to grow. Expanding is a good way to elevate their professional skills; rank-and-file staff can become supervisors, supervisors can become GMs, so it’s a good way to expose them to other areas. We want to provide them with career advancement so they can grow with our group.” 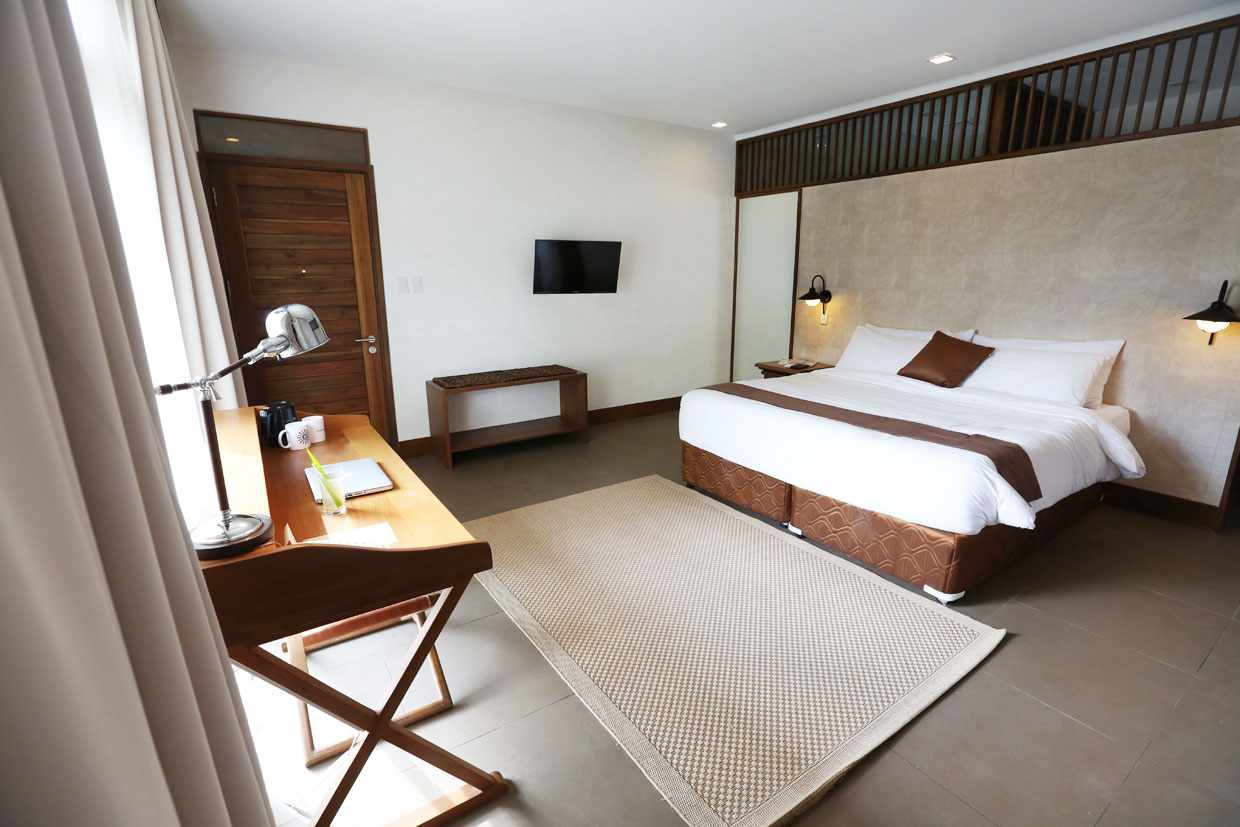 A good way of growing their portfolio is joining travel shows here and abroad. “It’s good exposure for us and at the same time it’s a way for us to be part of Team Philippines,” Nikki says. “It’s really selling the destinations — selling Palawan, Bohol and the Philippines, not just our resorts.” 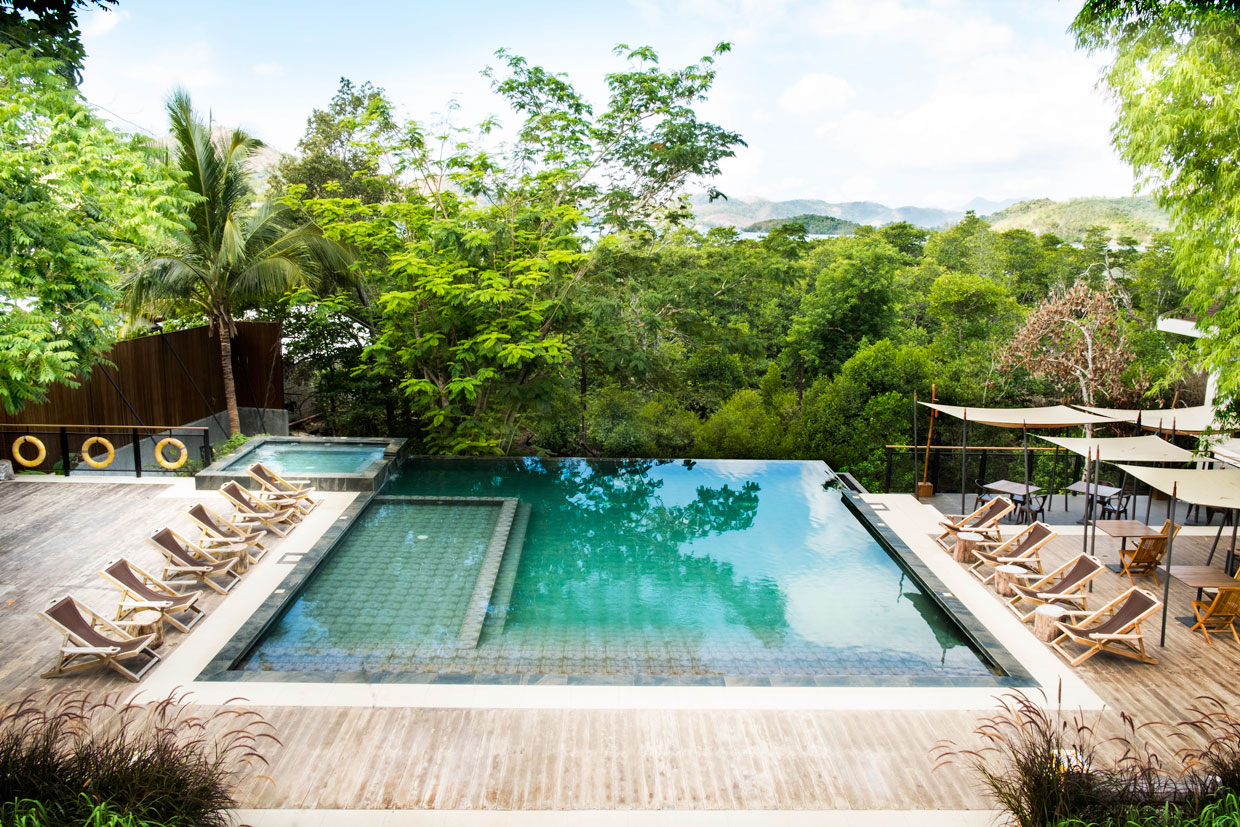 The swimming pool is beside the property’s mangrove.