El Nido Resorts and Lio Tourism Estate, a group of private island resorts and a tourism estate in the Philippines that is part of the Ten Knots Group, a subsidiary of Ayala Land Inc., become the first in the world to be awarded Sea Turtle Friendly Tourism Certification by the Wildlife Friendly Enterprise Network (WFEN).

Working with WFEN since 2017 to develop, implement and pilot best practice guidelines for resorts, tour operators, and other tourism businesses to contribute to conservation, El Nido Resorts and Lio Tourism Estate have demonstrated their commitment to sustainability and the protection of biodiversity including critical mangrove, seagrass, and coral reef ecosystems. 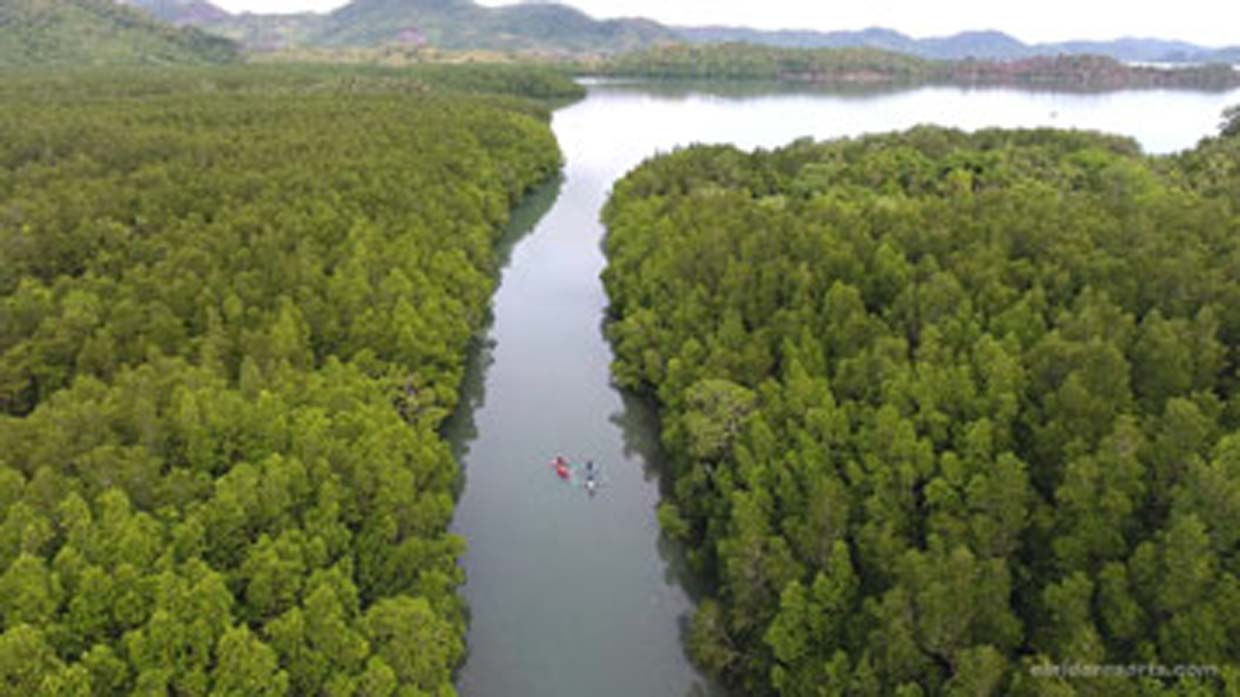 El Nido Resorts and Lio Tourism Estate have demonstrated their commitment to sustainability and the protection of biodiversity.

These four standalone resort properties, Apulit Island, Miniloc Island, Lagen Island, and Pangulasian Island, as well as the 325-hectare Lio Tourism Estate, have met the requirements for mitigating key threats to sea turtles and their survival through their Be GREEN (Guard, Respect, Educate El Nido) program. This includes implementing best practices to minimize negative impacts on sea turtles. Specific conservation actions include ensuring beachfront lighting that does not cause disorientation of hatchlings, and conducting active sea turtle patrols by staff help to protect nests, hatchlings, and adult turtles from poaching and other key threats.

In addition, guest education is prioritized to highlight actions tourists can take to keep sea turtles safe such as keeping a respectful distance from sea turtles in the water, never feeding them, and minimizing litter and marine pollution during their stay. The properties have eliminated disposable plastic products and host beach cleanup efforts to help address the global issue of marine plastic pollution. 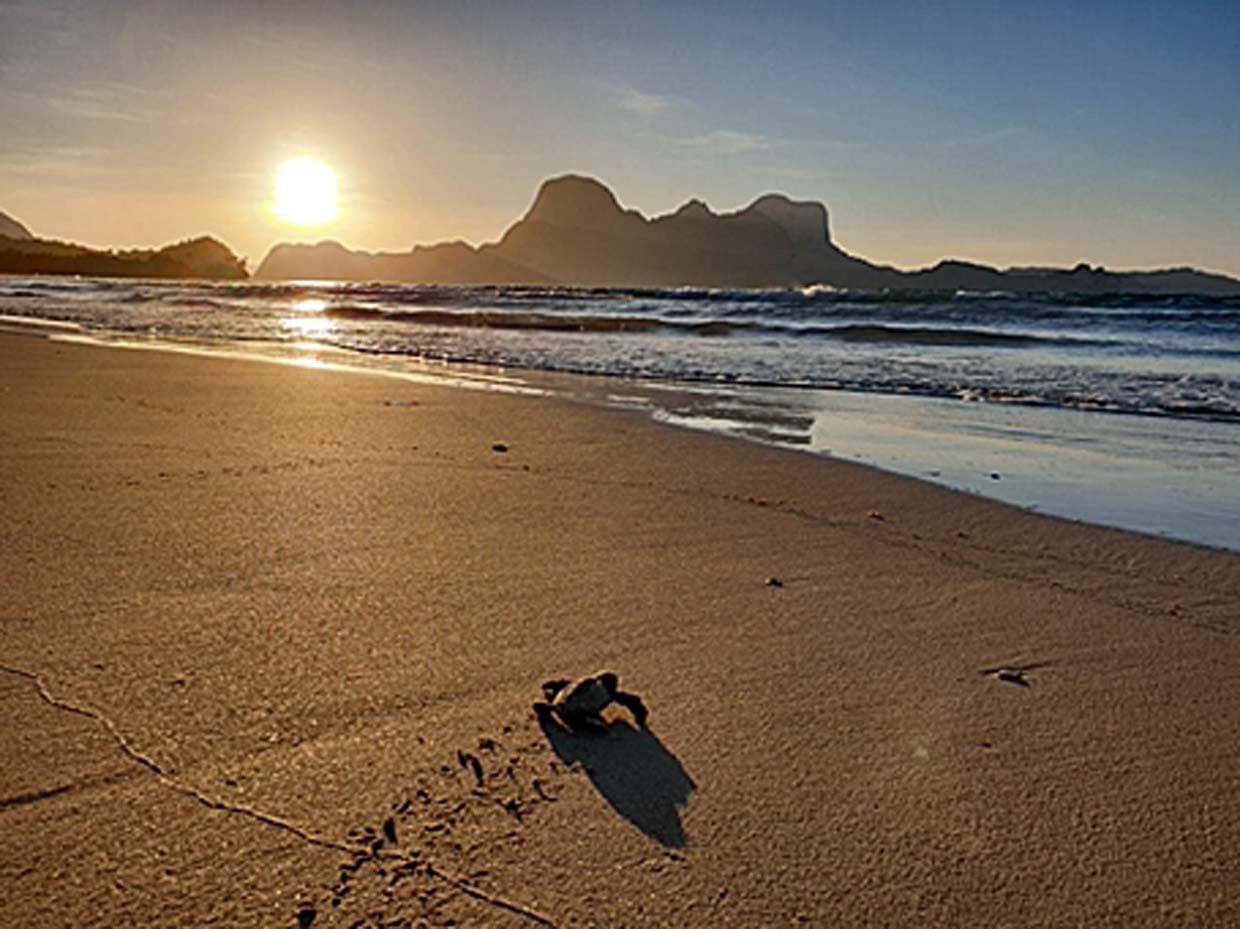 Located in Palawan, the province referred to as the “last ecological frontier” of the Philippines, Ten Knots properties span several islands in the municipalities of El Nido and Taytay which are Miniloc, Lagen, Apulit and Pangulasian. In the mainland, they have Lio Tourism Estate, better known as “Lio Beach,” a 325-hecare sustainably masterplanned mixed-use destination.

With over 850 species of fish, 45 genera of corals, and at least a hundred species of birds, El Nido also hosts five out of seven marine turtle species in its waters. Its beaches are important nesting habitat for three including the endangered Green, the critically endangered Hawksbill and the vulnerable Olive Ridley sea turtle. Other rare and protected species found on the resort properties include the Palawan Hornbill, the Asian Fairy-Bluebird, and the Philippine Pangolin. 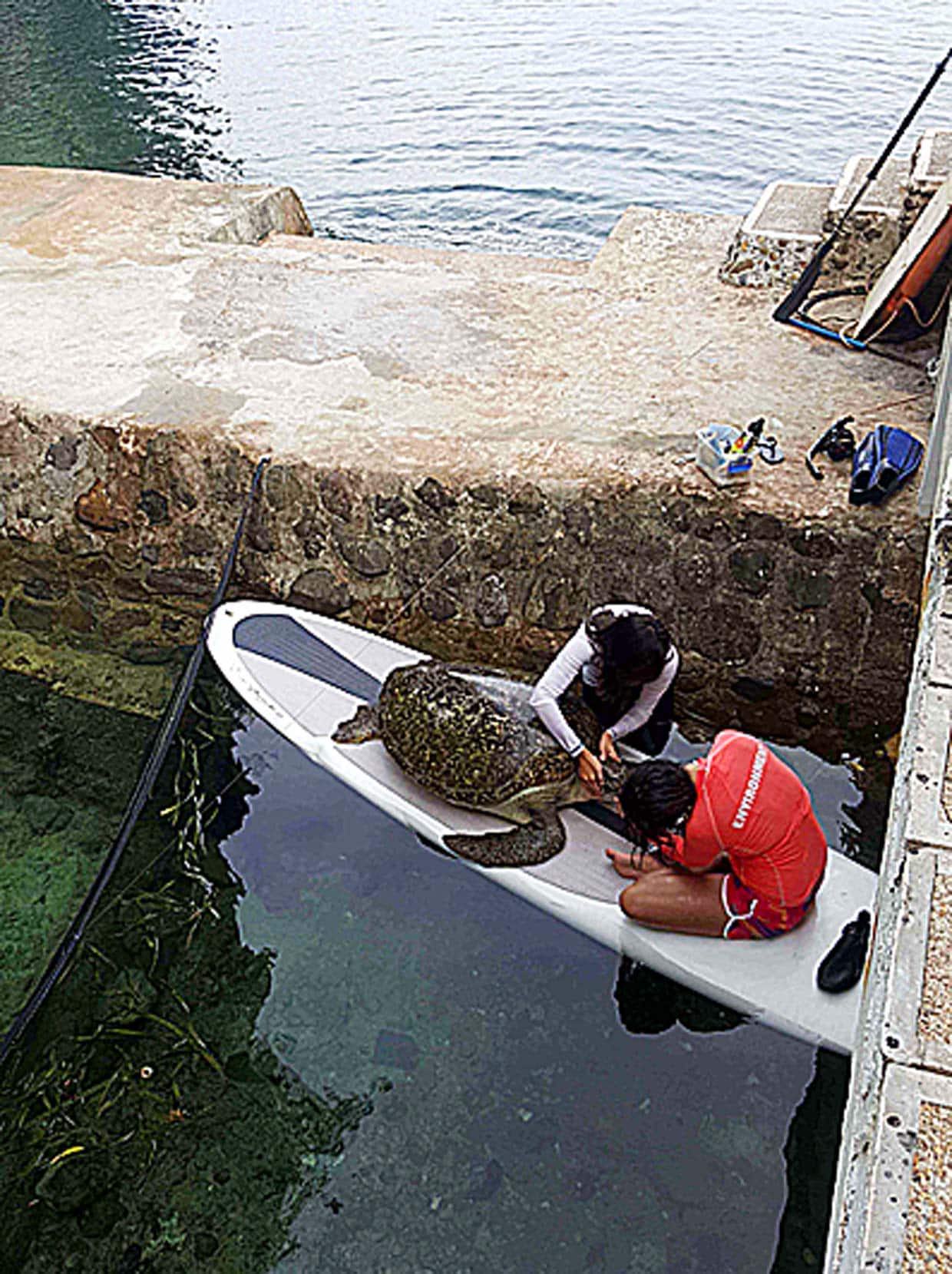 Turtle rescue and rehabilitation in and around Bacuit Bay are always done with wildlife veterinarians. Photo courtesy of ENR Be GREEN

“This certification comes at an opportune time as Ten Knots celebrates its 40th anniversary this year” says Ten Knots Group director for marketing Joey Bernardino. “It validates our efforts, showing us how we are on the right track when it comes to preserving the environment.”

“We are proud to add Ten Knots as part of the global Wildlife Friendly family of brands,” said WFEN executive director and co-founder Julie Stein. “They are a model we hope other resorts around the world will be inspired by to protect our fragile marine resources through tourism that advances conservation outcomes for species like sea turtles.” The Sea Turtle Friendly Tourism program will be open to global applicants this year. The standards were developed in collaboration with leading sea turtle experts around the world including Romy Trono, the Wider Caribbean Sea Turtle Conservation Network (WIDECAST), and others. 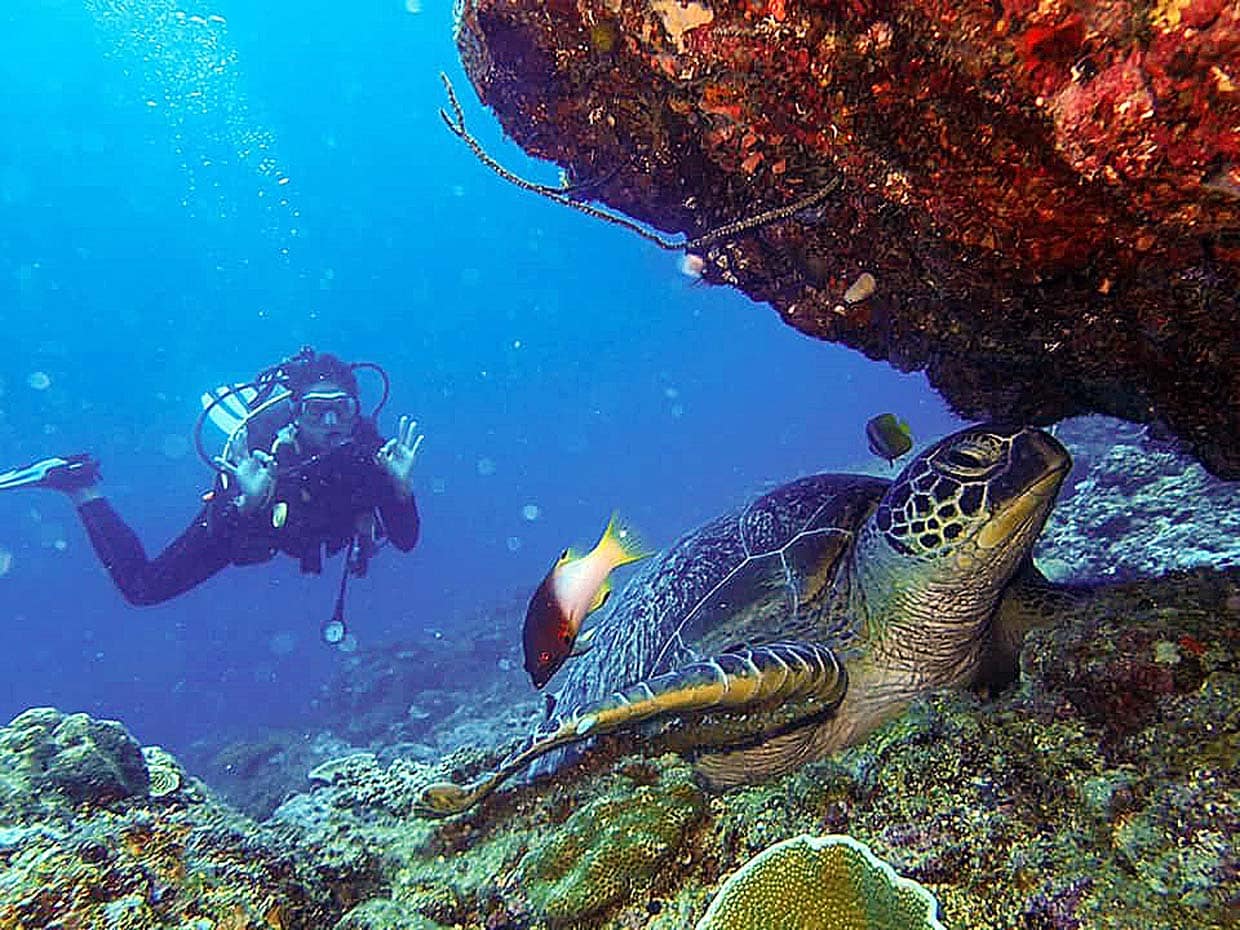 There are plenty of opportunities for responsible turtle interactions with Ten Knots. Photo courtesy of JOB OCHOA

You may book through www.air-swift.com. 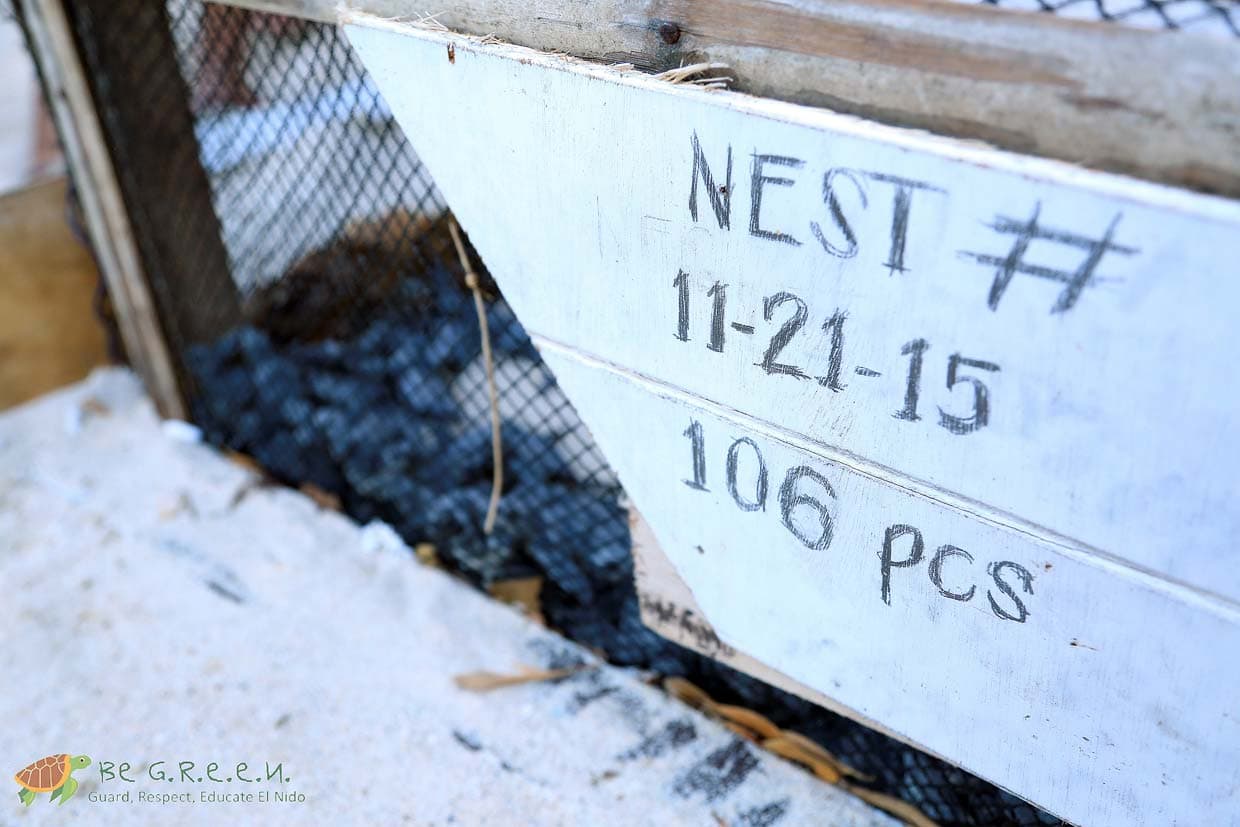 Olive Ridley Turtle hatchlings ready for release. All turtles are released within the day of hatching at either sunrise or sunset. Photo courtesy of ENR Be GREEN

Shopping is more fun in the Philippines

A safe way to get rid of harmful insects at home

Leasing — and making money — from your property without the hassle

Cavite and Laguna: Evolving with the Times
Scroll to top