Tarlac province has always been considered the melting pot of Luzon. It has two major languages (Kapampangan and Ilocano) and a cuisine that changes the farther north you go. You can say that one-third of the province is more Pampango, the other third more Ilocano, and the last very Tagalog.

I belong to the Kapampangan side of the province. My roots are in Concepcion, Tarlac — the hometown of Ninoy Aquino. My late grandparents, who were good friends with Ninoy’s mother Doña Aurora (Apung Guindang to the town), used to say that during the entire Marcos dictatorship, Tarlac province (Concepcion especially) was largely ignored when it came to infrastructure funding; only McArthur Highway was well developed because it led to Ilocos. 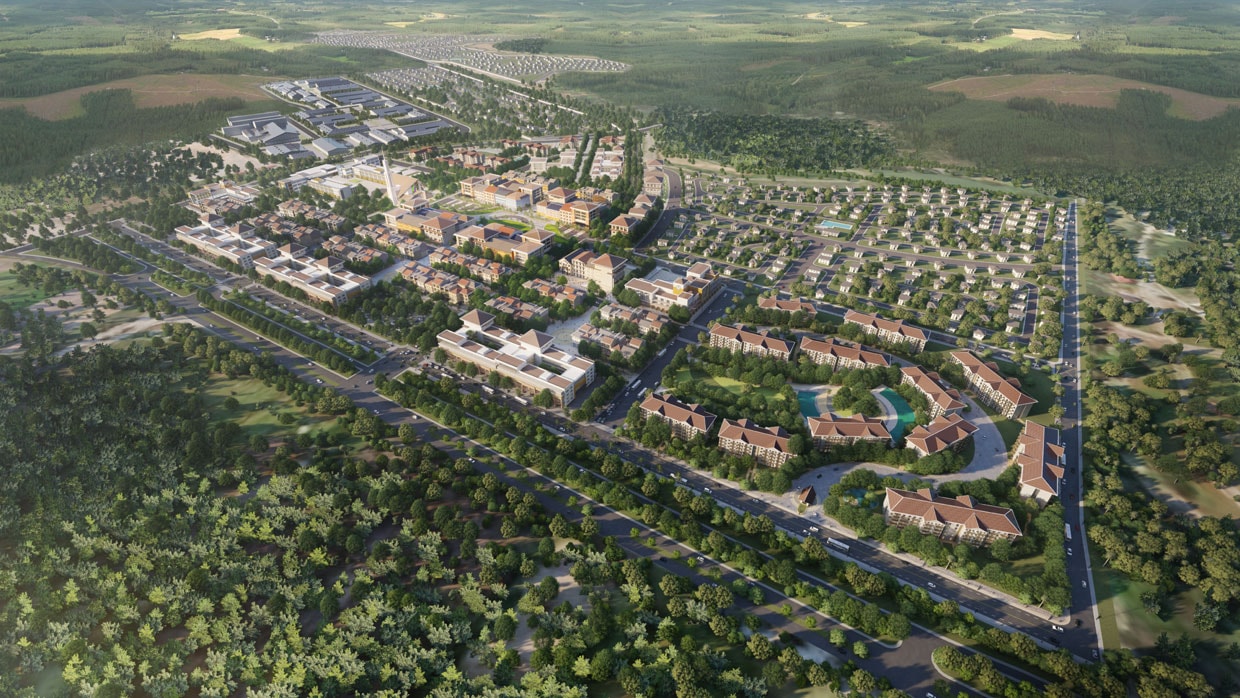 Tarlac is a late bloomer, if you will. It didn’t develop as early, as fast or as big as Angeles City and Pampanga did.

And you know what? We liked it that way. We liked that things were the way they were for as long as possible. In Concepcion at least, everyone knew you and your family tree; everyone was connected. I didn’t visit for many years and felt my heart breaking a little when I saw that the first fast-food restaurant had opened because I knew others would follow (and they did). Strangers had come to town and never left, other languages were spoken.

I love the convenience that SCTEX has brought to the north, but I also miss driving home to Concepcion and all I’d see were farmlands and Mt. Arayat dominating the sky and the small towns at its feet.

For decades, Tarlac province had one center: Tarlac City, which had one center as well — F. Tañedo St., named after a forgotten hero from Tarlac, with its bevy of shops, shoe stores and Cindy’s, and a hot traffic mess.

In the past decade, as development moved north past Angeles City and Clark, Tarlac towns have caught the attention of national developers.

Last month, Ayala Land, Inc. (ALI) launched a new mixed-use estate in Tarlac City. Called Cresendo, it’s a 290-hectare property that’s designed to be the new downtown of the city. Located in Barangay Central near the Subic-Clark-Tarlac Expressway (SCTEX) and MacArthur Highway, the property used to be the holding area of Central Azucarera de Tarlac.

Cresendo estate head John Estacio, the same man who headed the development of Nuvali, says, “We’re here for two main reasons. The first is that it’s very accessible. You have Clark International Airport, which is being expanded and will soon be able to service 12 million passengers; by land you have McArthur Highway, SCTEX and TPLEX; through SCTEX and Subic, you can access the sea. The second reason is we believe we’re getting a demographic sweet spot. Seventy percent of the population is between the ages of 15 and 50, a working-age population. Twenty-five percent is zero to 14 years, so in the next decade or so they become the workforce. 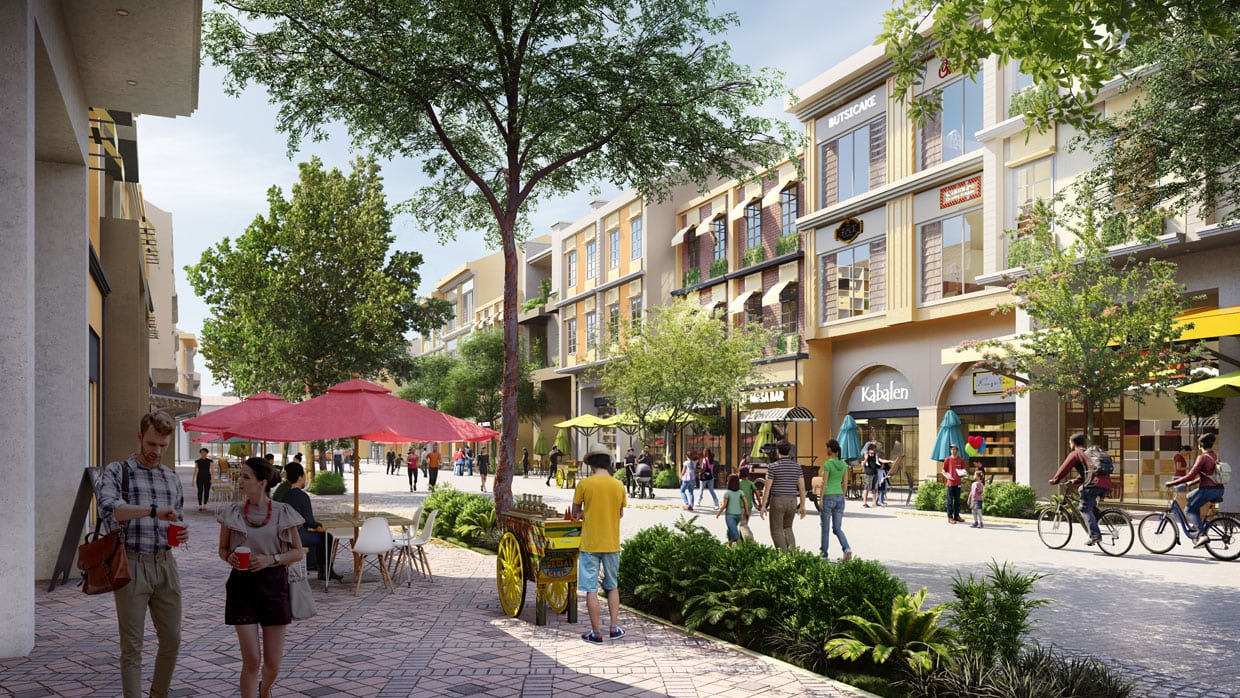 Cresendo keeps its design on a human, provincial scale.

“The estate is called Cresendo because, as you know, crescendo is a term that means the highest point in a progression. Now how do we execute this? We hope to deliver life’s essentials and provide enterprise, business and employment.”

Ayala Land is taking a different approach to Cresendo. It will be a modern “local community,” it will replicate and complement the scale of the existing poblacion — a church, plaza and shops surrounded by residential enclaves.

Cresendo will have a 30-hectare urban core comprised of a 1.5-hectare central plaza, school, commercial center and a church. “The urban core of Cresendo is master-planned to put people first. It creates vibrant, safe and interesting walking paths around the community. One can peruse ground floor retail while walking around the neighborhood, or cross over to pocket parks and promenades, view public art and installations from the plaza, to the church, the market or the school,” says John.

John says that surrounding the Cresendo central plaza will be a commercial district made up of commercial buildings ranging from 500 sqm. to 2,000 sqm. “The smaller commercial lots categorized as shophouses are envisioned to give rise to homegrown enterprises and inspire entrepreneurship. Business owners or employees can live right above their stores, service shops, training centers or processing centers. Opportunities to grow small, medium and large businesses will abound in the district. A 1.5-kilometer greenway leads from the central plaza all the way to the seven-hectare River Terraces near the residential areas.” 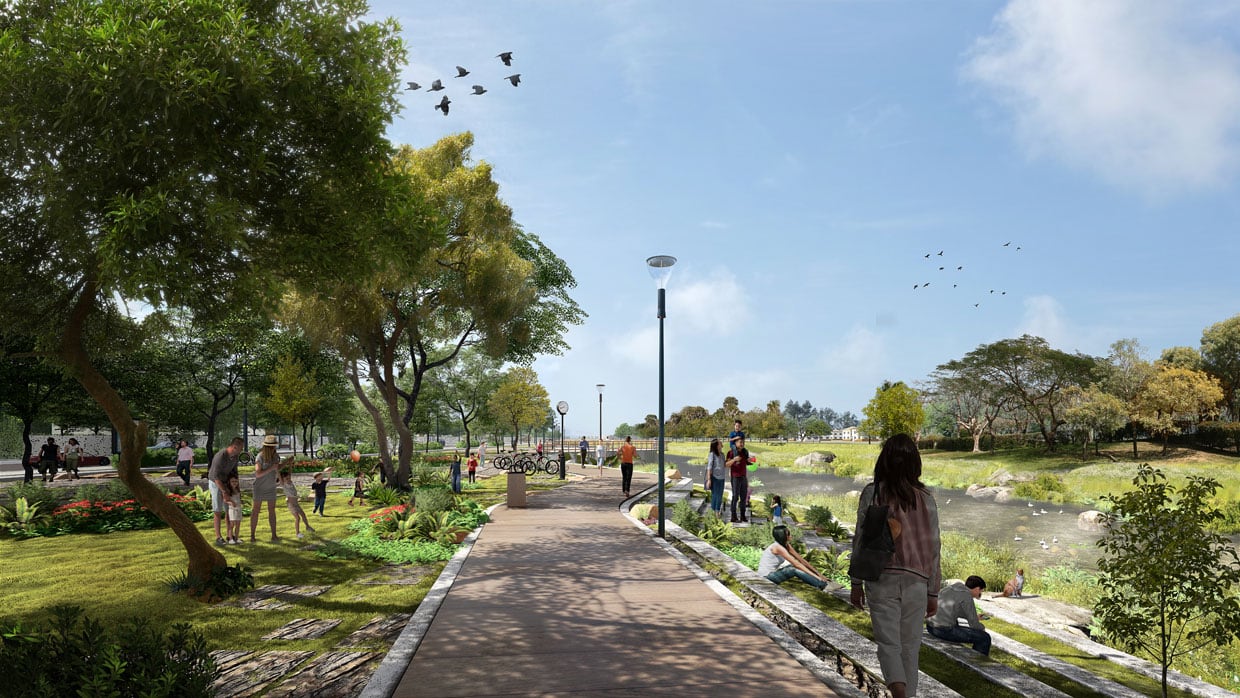 The seven-hectare Cresendo River Terraces will function as a community convergence point with its landscaped gardens, jogging paths and viewing deck. It will also serve as the estate’s detention pond.

Cresendo will have dedicated pedestrian and bike lanes that connect the estate’s active urban core to the quieter, residential living zones. “Roads will be lined with trees endemic to the area. Three-meter wide sidewalks and arcaded walkways will all be part of the estate’s pedestrian-friendly design. Pocket parks and pedestrian promenades will be engaging and easily accessible for estate residents and visitors.”

The Cresendo River Terraces will function as a community convergence point with its landscaped gardens, jogging paths and viewing deck. It will also serve as the estate’s detention pond.

“Don Bosco Technical Institute will open a senior high school in Cresendo, followed by its Technical Vocational Education and Training Center. The institution will be the first of its kind in Tarlac, accommodating about 5,000 students. It will equip graduates with the technical proficiency and specialized skill set that will be required in the industrial park and the commercial developments within and around the estate.”

John adds that they expect light to medium industries including warehouses and logistic hubs that wish to cater the northern and central Luzon markets to locate in Cresendo.

ALI residential brand Avida Land will be the first to build residential villages on the estate. Avida’s mid-range house and lot offerings are expected to attract home buyers from Tarlac, Metro Manila and abroad, especially those with roots in the province.

“Tarlac City is a next-wave city that benefits from a number of government infrastructure projects. It has a young and growing population and it also lies in the main transport corridors from Manila to Northern and Central Luzon,” says John.

Providing more employment opportunities in the area will be the 32-hectare Cresendo Industrial Park (CIP). CIP will have various lot sizes ranging from 1,200 sqm. to 10,000 sqm. for sale at P6,000 to P9,000 per sqm. This will be open to locators in light to medium, non-polluting industries by 2022. The industrial park is expected to generate approximately 2,000 jobs.

Cresendo will have a privately managed transport system, ensuring high accessibility and traffic efficiency throughout the estate.

“Based on ALI’s long experience in developing integrated, mixed-use estates, Cresendo will create an environment that will help drive opportunities for education, employment and enterprise in this area. It’s an exciting prospect for nearby communities and provinces, and for anyone who has called Tarlac their hometown,” says John. “We aim to incorporate community convergence spaces, innovation and inclusion in our development here in Cresendo.”

ALI is investing P18 billion in Cresendo with an initial P5 billion allocated for the first five years of the project.

Bria Homes focuses on expanding in Visayas and Mindanao