When President Rodrigo Duterte took his oath of office in 2016, he declared his grand ambition of bringing the golden age of Philippine infrastructure under the Build Build Build program — the grand plan to modernize the country’s transportation networks by paving new roads, constructing bridges, opening new airports and seaports, and modernizing railway lines, as well as ensuring the smooth interconnectivity and inter-operability of the various modes of transport. Build, Build, Build is an essential step in modernizing and innovating the country’s transport infrastructure.

The nationwide infrastructure boom is composed of more than 20,000 projects that will significantly improve the lives of the Filipino people. Some of these big-ticket items are future-proofed infrastructure that will sustain and even accelerate the country’s growth and, most importantly, make people’s lives more comfortable.

The Duterte administration’s flagship “Build Build Build” program increased infrastructure spending from 5.4 percent of the country’s Gross Domestic Product (GDP) in 2017 to 7.3 percent by the end of 2022. This is higher than the 2.4-percent average recorded by the past six administrations in the last five decades — and the highest budget allocation for infrastructure in Philippine history. With an estimated cost of above P8 trillion, these projects include roads, highways, farm-to-market roads, airports, seaports, terminals, evacuation centers, lighthouses, hospitals, schools and government centers. The 100 Infrastructure Flagship Projects (IFPs) identified are just a subset of the whole Build Build Build program. 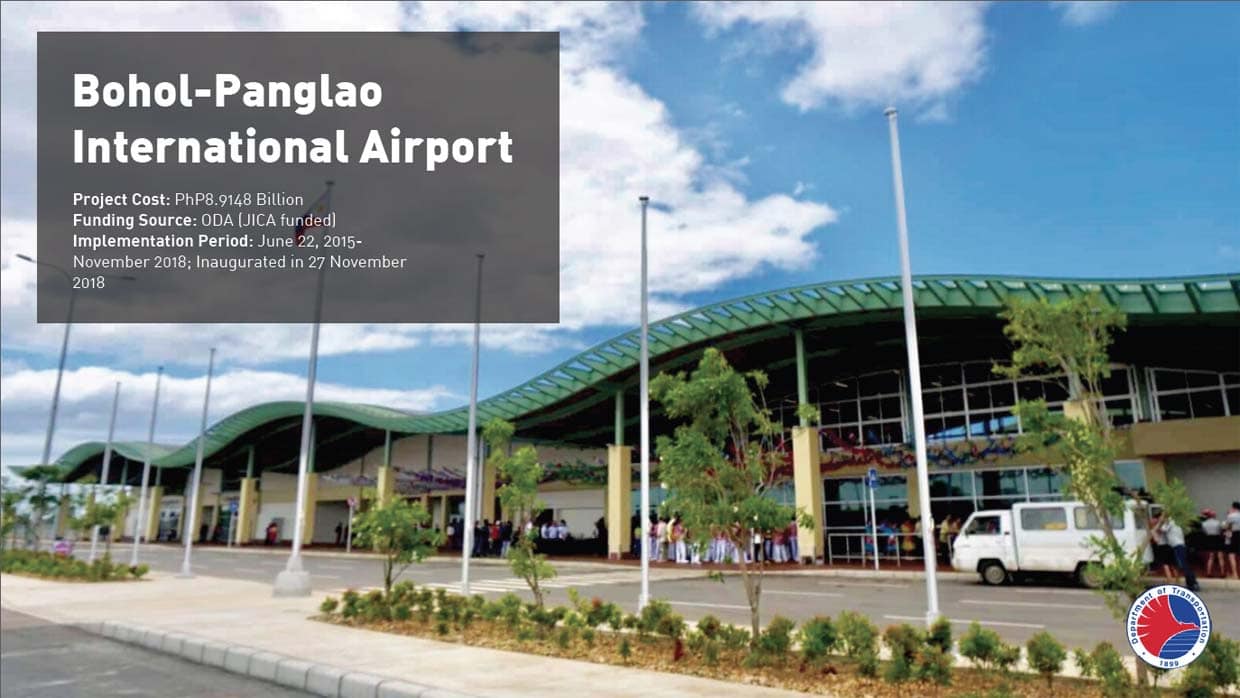 Investment in infrastructure is expected to impact job generation and investment growth. The construction sector is experiencing a 12.7-percent growth from 2016 to 2018. (Source: DTI). From 3.544 million workers in the sector in April 2017, it grew to around 4.2 million workers in 2019, with construction contributing to about 51.9 percent of the industry sector employment. (Source: PSA). Infrastructure outlays on the average contributed to six percent of GDP under the Duterte administration. Historically, the Philippines has only allocated an average of 2.4 percent of its GDP for infrastructure in the span of six administration during the last 50 years. 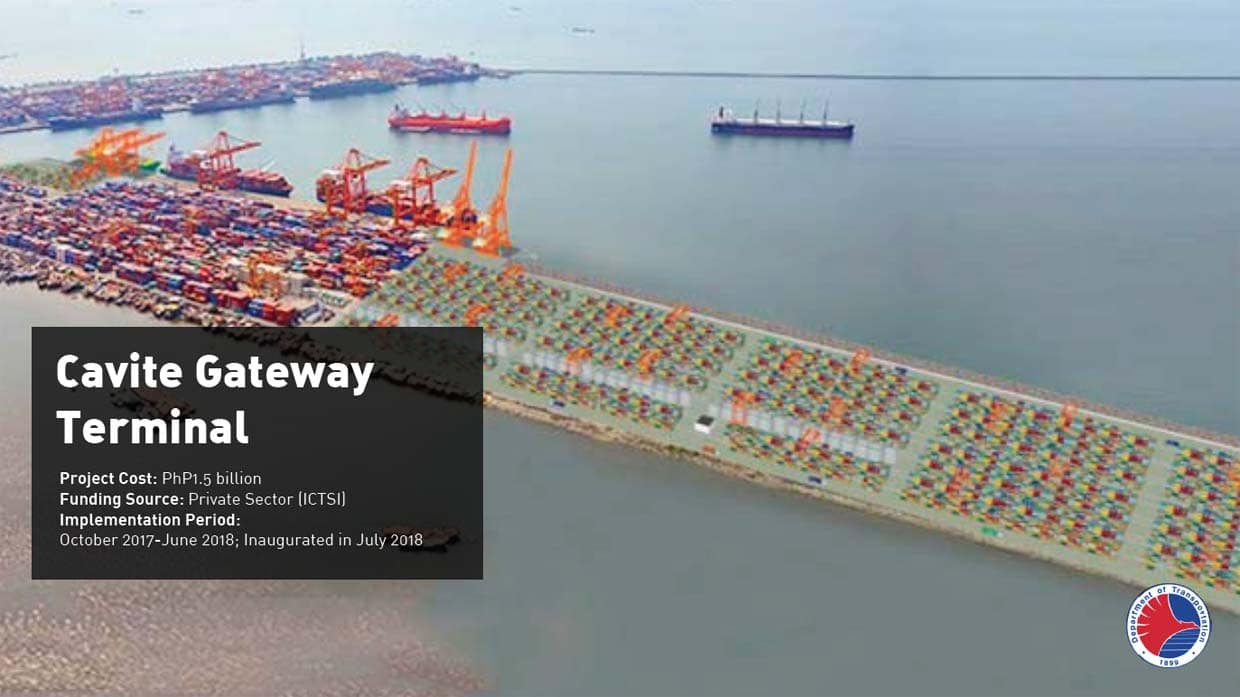 Under the Maritime Sector and the Philippine Ports Authority (PPA), 200 commercial and social/tourism port projects were completed from 2016 up until July 2019. Of this number, 159 are commercial port projects facilitated by the PPA, while 41 are social/tourism port projects under the DOTr Maritime Sector. Notable port projects include the construction of the country’s biggest Passenger Terminal Building at the Cagayan de Oro Port, and the rehabilitation of Opol Port in Misamis Oriental, Sasa Port in Davao, Butuan Port in Agusan Del Norte, Tubigon Port in Bohol, Limasawa Port in Southern Leyte, and General Santos (Makar Wharf). The country’s first barge terminal, the Cavite Gateway Terminal, was built to reduce truck traffic on major roads and offer a cost-effective access to goods between Manila and Cavite through the waterways. On maritime safety, about 560 out of 600 total lighthouses are operational nationwide, as of November 2019.

Six railway projects are under construction while one railway project is currently under rehabilitation. Railway projects to be undertaken next year include the North-South Commuter Railway (NSCR), Metro Manila Subway Project, Metro Rail Transit Line 3 (MRT-3) Rehabilitation, Mindanao Railway Project, Philippine National Railway (PNR) South Long Haul, Light Rail Transit Line 1 (LRT-1) Cavite Extension and Subic-Clark Railway. The construction of each of the projects is part of a plan to expand the country’s railway system to a total length of 1,144 km in 2022 from 77 km in 2016. Once all railway projects are completed, the number of stations across all railway systems is targeted to increase to 169 from 59, the number of trains to 1,425 from 221, and daily ridership to 3.26 million from 1.02 million. 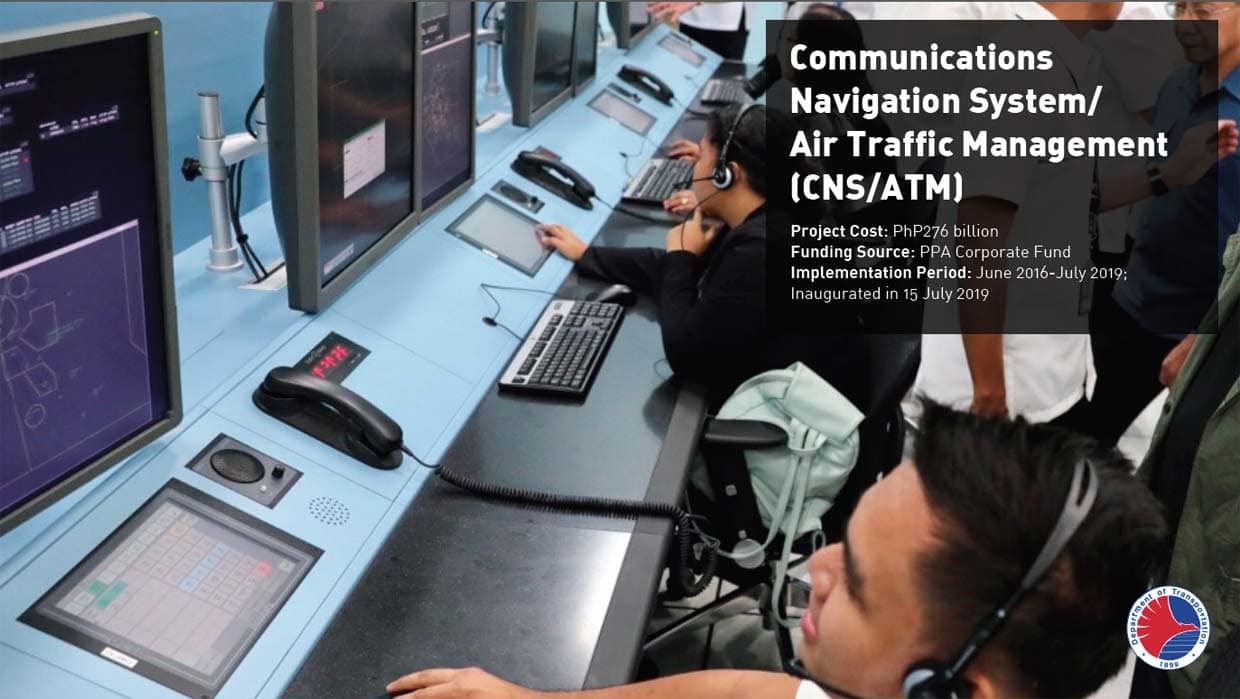 A total of 64 airport construction and rehabilitation projects have been completed since June 2016, with 133 more projects ongoing. Among the recently completed are the Bohol-Panglao International Airport, Mactan-Cebu International Airport, Sangley Airport in Cavite, Lal-lo International Airport and Puerto Princesa International Airport. International airports in Davao, General Santos, Zamboanga, Iloilo, Kalibo, and Laoag are also undergoing improvements.Infrastructure developments for the domestic airports of Virac, Marinduque, Tuguegarao, San Vicente, and Busuanga in Luzon; Maasin, Tacloban, and Catarman in the Visayas; and Ipil, Camiguin, and Siargao in Mindanao, have also been accomplished. Aside from developing the nation’s airports, major programs and initiatives have been launched to further uplift aviation and airports services, such as the establishment of new Communications, Navigation, Surveillance/Air Traffic Management System that now covers 100 percent of Philippine airspace. This means the country now has a total of 13 radars and one satellite radar. The DOTr is also working on the night rating of 15 more commercial airports to further ease decongestion in major gateways.

Realizing The Dream Of PUV Modernization

Back in June 2017, the DoTr issued Department Order No. 2017-011 or the Public Utility Vehicle Modernization Program (PUVMP), a flagship program of the Duterte administration that envisions a restructured, modern, well-managed and environmentally sustainable transport sector where drivers and operators have stable, sufficient and dignified livelihoods while commuters get to their destinations quickly, safely and comfortably.

Under this initiative, jeepneys, buses and other public utility vehicles (PUVs) that are at least 15 years old will be replaced with safer, more comfortable and more environment-friendly alternatives over the next three years. The Land Transportation Franchising and Regulatory Board (LTFRB) and the Department of Trade and Industry (DTI) presented 16 prototype jeepneys, all locally manufactured and based on guidelines set by the DOTr with features that include Euro 4 engines, CCTV cameras, GPS, automated fare collection systems, front-facing seats and new exits on the right-hand side. In addition to the phase-out of old jeepneys, the program aims to change the current franchising system, revise and introduce new routes and provide training to jeepney drivers.

To finance the project, transport corporations and cooperatives received P1.5 billion to purchase new PUVs through the Development Bank of the Philippines (DBP) Support Alternative Driving Approaches (PASADA) Program. The program will feature a five-percent equity for vehicle purchase, six-percent interest rate and seven-year repayment period. The government will also offer a maximum subsidy of P80,000 to cover the equity payment. DoTr also signed a Memorandum of Understanding (MOU) with the Landbank of the Philippines to set up a P1-billion financing facility for PUJs via the Special Environment-Friendly and Efficiently Driven (SPEED) Jeepney Program. According to the plan set by the DoTr, the proposed implementation time frame should be on 2017 Q4 for the Pilot program in Metro Manila, 2018-2019 in Metro Manila, Metro Cebu, Metro Davao and 2019-2020 in other highly urbanized cities and the rest of the country.

For most Filipinos, the daily grind begins and ends with the morning and evening commute. Millions flock to the roads to reach their desired destinations — classes at school, shift schedules at work, important meetings, lunches and dinners with colleagues and family, even regular errands to the mall. The ongoing innovations in transportation and infrastructure holds much promise to ease the life of the daily commuter and, hopefully, it won’t be long until we can reap the benefits of having an efficient, reliable and affordable mode of transportation that may come sooner than you think.