On a cool, crisp morning, you wake up to a most amazing sight outside your bedroom window: a deep blue sea and Samal Island shimmering in the distance. In the next breath, you are at the center of a modern and bustling city. Are you just dreaming? It may well be a dream that Azuela Cove promises to fulfill as Ayala Land Inc. (ALI) and the Alcantara Group’s 25-hectare masterplanned, mixed-use community rises in Davao’s prime waterside business and residential district.

“On one side is a breathtaking view of the Davao Gulf and the Island Garden City of Samal. On the other side is the middle of the city. Think of it as BGC or Makati, but when you turn around, it’s like Anvaya Cove,” shares Rico Manuel, ALI assistant vice president and area head for Mindanao.

Indeed, the place will be a beautiful mix of elements where one can enjoy serene waterside views on one end and a modern city on another. A refreshing living experience and quality of life that one can only find in Azuela Cove in Davao. 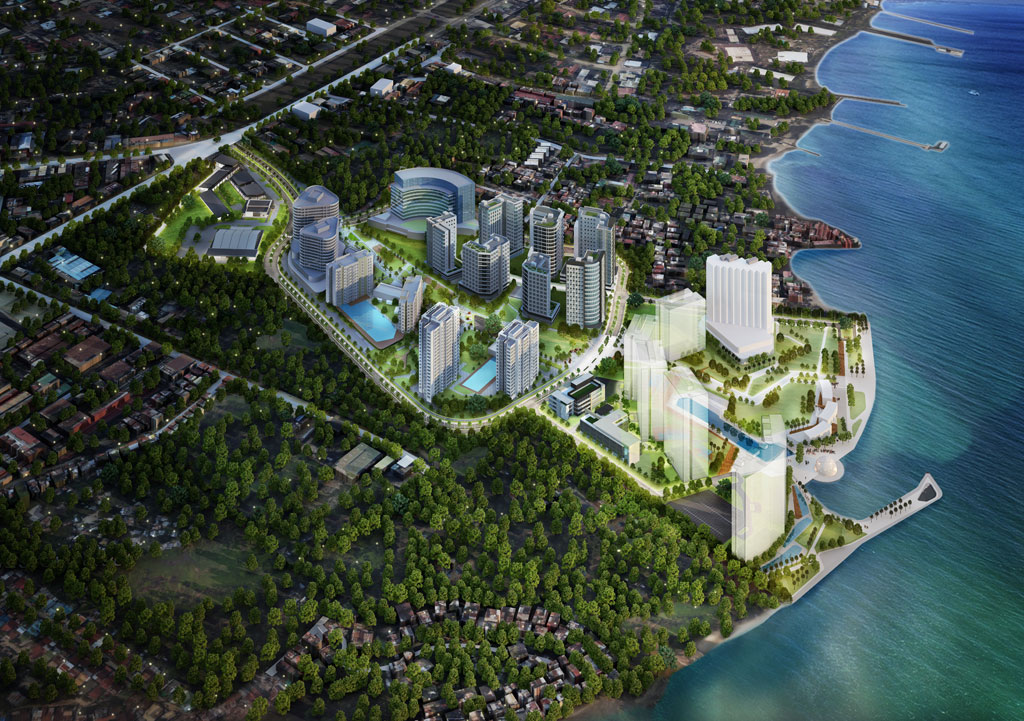 Ayala Land, among the country’s top developers, has ventured out of Metro Manila, building its integrated, mixed-use estates and spurring economic activity in more and more parts of the country. “Our commitment is to develop thriving communities in growth centers across the country to help fuel the local economy, generate jobs and business opportunities for more Filipinos,” says Aniceto V. Bisnar Jr., Ayala Land vice president and chief operating officer for Visayas-Mindanao.

By providing office spaces, hotels, and commercial locators with residential developments, Ayala Land has enabled more people to have access to jobs.

ALI first came to Davao in 2011, with the opening of Abreeza mall and the Seda Abreeza Hotel.

In 2017, ALI launched Azuela Cove, a joint venture between Ayala Land, Inc. and the Alcantara Group of Companies which owned the land that used to house a plywood factory. Azuela Cove is right by the main thoroughfares of JP Laurel and R. Castillo on Km. 7 Lanang, Davao City. That’s a mere 20 minutes from the Davao International Airport. 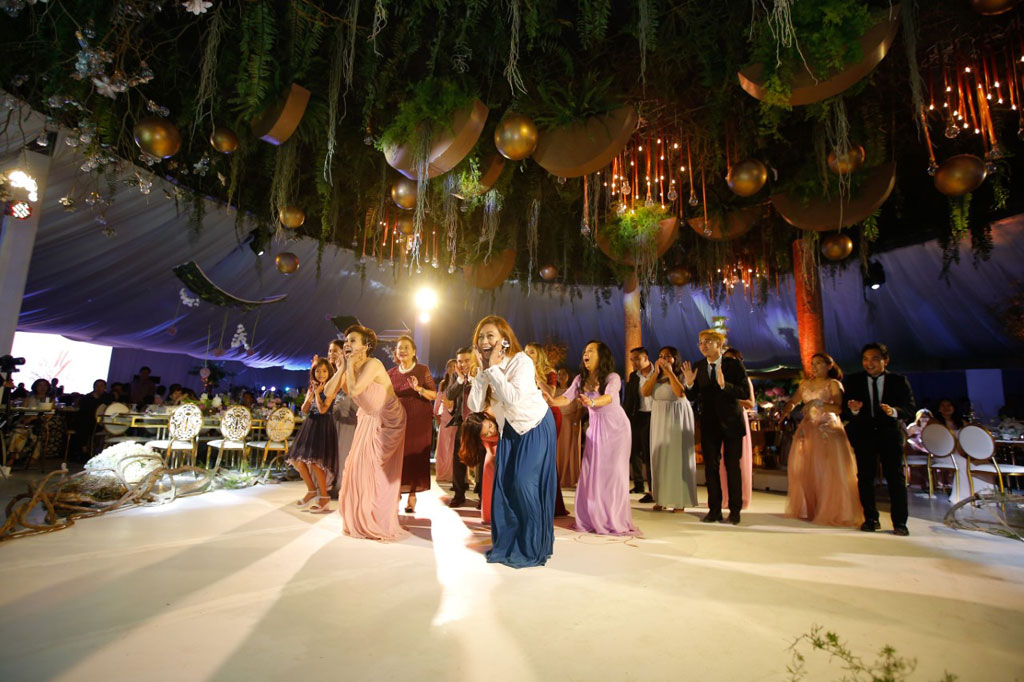 The Enderun Tent at Azuela Cove, is a 2,000-sqm. air-conditioned events tent that can accommodate up to 1,500 people for corporate and social events, conventions and exhibits.

Azuela derives its name from the Spanish word azul to highlight the estate’s bluer-than-blue waterside attraction. The thoughtfully masterplanned Azuela Cove is designed around open spaces leading to the Davao Gulf, a precious marine conservation area.

Last year, we saw the groundbreaking of Ayala Land Premier’s The Residences at Azuela Cove North and South Towers. Condos with a view? This you gotta see! For instance, the 196-sqm. Horizon Suite boasts a 25-sqm. balcony facing the Davao Gulf. All three bedrooms of each of the 147 condo units have a view of the postcard-pretty Samal Island. On launch day alone, all 70 units of the North Tower were sold out.

Waves of excitement swept over the island as news of the coming of Azuela to Davao spread by word of mouth. But of course, the Davaoeños have a lot of reasons to be excited (or should we say tickled pink) about Azuela. For one, from construction to its completion, Azuela is expected to generate some 6,500 jobs for the local residents.

For another, Azuela Cove brings a well-thought-out mix of residential, business, and commercial spaces, complemented by world-class social and healthcare institutions like St. Luke’s Medical Center.

Yes, St. Luke’s Medical Center is building a third hospital, this time in Davao City (the first two hospitals are at Bonifacio Global City in Taguig and in Quezon City), bringing state-of-the-art facilities combined with the expertise of locally and internationally-trained doctors and the industry’s leading technologies to deliver excellent medical care. Specializing in chronic and degenerative diseases, the hospital will have a minimum bed capacity of 150 to cater to patients from Davao as well as those coming from all over Mindanao. St. Luke’s Medical Center in Azuela Cove is set to open by 2023.

Davaoeños are also beyond thrilled to welcome the initial tenants in Azuela Cove’s mixed-use community. There’s The Shops at Azuela Cove, all of 4,000 sqm., that boasts a retail mix of local homegrown food favorites as well as classic national and international gastronomic delights.

Amid a relaxing vibe that’s conducive to great family bonding over good food (no need to pay extra for the ambience), The Shops at Azuela Cove has a varied mix of restaurants that includes Cafe Laguna for good old Pinoy comfort food, Dulce Vida for your sweet cake and pastry indulgence, Bless Okiniiri for “unli” tempura, sushi, maki, etc., Yellow Cab for your pizza cravings, Coffee Bean & Tea Leaf for your caffeine fix, and Nord’s Bread Hub for all-day food offerings.

And of course, there’s Union Market, an all-in-one pasteleria, taperia and brasserie, only at Azuela Cove.

Azuela Cove will also be home to GMarket, a three-story Gaisano supermarket and complimentary retail now under construction and due to open by the fourth quarter of 2020.

“We are currently finalizing the plans for a waterside park and dining area where we will have cafes and restaurants with indoor and outdoor seating, very similar to Singapore’s Sentosa Island. These should be operational by late 2022 or 2023,” Rico excitedly shares. “We’re also planning a waterside hotel, that is an exciting development to look forward to.”

Set to open its doors next month after some renovation work is the expanded Enderun Tent at Azuela Cove, a 2,000-sqm. air-conditioned events tent that can seat up to 1,500 persons for corporate and social events, weddings, and conventions. Expect a more private tent with movable dividers and its own stand-alone hot and pastry kitchens as part of the expansion.

Enderun is also building two teaching kitchens for cooking classes in both culinary and pastry courses. The hot kitchen will be operational by December, while the pastry kitchen will follow shortly. Specialized regional cuisines will be made available.

To make one’s retail experience even more unique, a Greenspine walkway is also in the plans and is targeted to open by 2022. “It’s a retail-lined walking path, similar to Bonifacio High Street, that will cut through the middle of the estate,” Rico points out. “Our plan is to put the roads at the periphery of the property so no cars can pass in the center. Azuela Cove will be a walkable and pedestrian-friendly estate.” 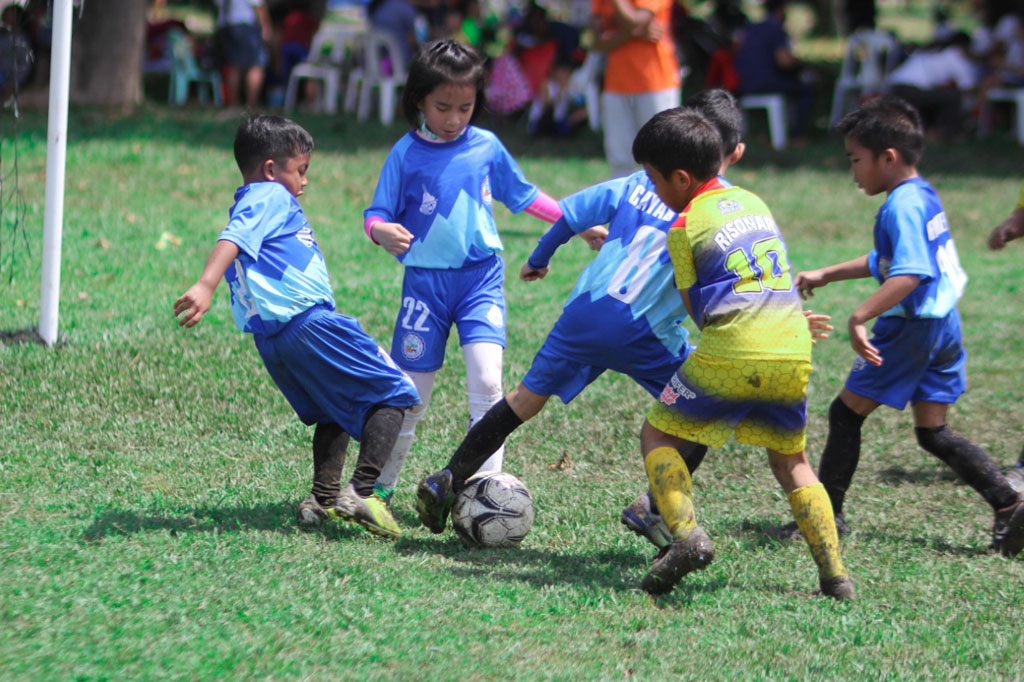 While you get your ample dose of retail therapy, Azuela Cove also promotes a healthy lifestyle. Its outdoor spaces and open parks are conducive to exercise, a lot of jogging or walking, outdoor activities, and sporting events. “In fact, a lot of sporting events are happening on site,” says Rico. “We currently have a good number of run races and are open to hosting more, and of course, there is the signature Davao ALVEO Ironman 70.3 triathlon being held at Azuela Cove as part of the Araw ng Dabaw celebration in March.”

Added features for sports buffs are a soccer field of international standards and a multi-purpose court for basketball and volleyball with locker and shower rooms.

Certainly, Azuela is elderly-friendly, providing lots of relaxing spaces and places where seniors can bond, perhaps perfect their tai chi moves or simply relive the good old days. And for pet owners, Azuela is pet-friendly, too.

In all its developments, ALI has taken into account environmental, social, and economic sustainability within its estates. Studies are conducted on the site’s resiliency and disaster risk reduction measures are integrated into the estate’s design.

Rico concludes, “Aside from what’s already there with The Shops, the Enderun Tent and sports facilities, the next time you go to Azuela Cove, there will be something new to see and do. There’s a grocery opening soon, a couple of residential towers, and a hospital coming up, and not too far from now some waterside retail, too. The promise is happening.”

And the people of Davao will surely be happy to wake up to Azuela Cove’s beautiful promise!

Camella Homes: The favorite township in the City of Golden Friendship

Now is the best time to invest in Bay City

Parklinks: Changing city living as we know it

Greenfield expands condo footprint, launches midrise development in the So...
Scroll to top