By any measure, these are surreal times we live in. Never before have countries ordered their citizens to isolate themselves in their homes for extended periods; cities around the world that are normally filled with crowds, full of life and laughter, are now deserted; factories are shuttered and empty. Never before has staying home become so critical. And yet, things still need to be done — and not just by governments.

In the Philippines, it didn’t take long for the private sector to mobilize their people and resources to help in the fight against COVID-19. We are, after all, a people largely used to natural disasters and an innate bayanihan spirit to deal with the aftermath.

In the first week of the Metro Manila and Luzon quarantine, which started on March 15, Philippine conglomerates — especially in the real estate sector — acted quickly to protect their employees and communities, and the nation.

BCDA president Vince Dizon says WTC is one of four large venues being converted into a COVID healthcare center.

And it took only seven days to build.

“Collaboration between the public and private sectors is vital during these times, and we will continue to lend support to the government to help the country recover from this pandemic soon,” Ayala Land chairman Fernando Zobel de Ayala says.

Dubbed “WTC We Heal as One Center,” the project is the collective effort of Ayala Land Inc., Globe Telecom Inc., Manila Water Co. Inc., Integrated Micro-Electronics Inc. (IMI), and AC Energy Inc., together with the ICCP Group and Manila Exhibition Center Inc. (MEC), and with support from the Bases Conversion Development Authority (BCDA) and the National Government. The Ayala Group of Companies pooled P46.4 million for this project. 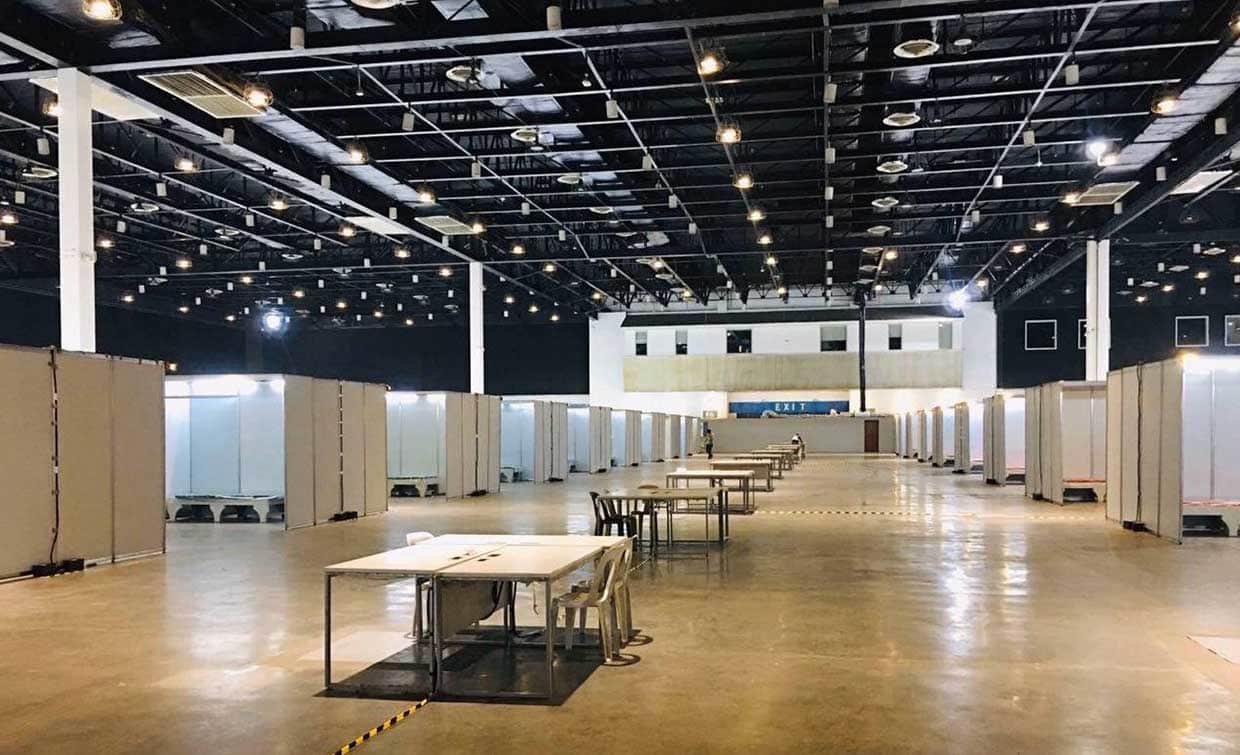 “When the national government asked for Ayala Land’s support, we immediately mobilized and pooled our resources to assist in the best way we can,” Ayala Land president and CEO Bobby O. Dy said. “We hope that this facility will help our country get through the COVID-19 pandemic. We are privileged to work with like-minded partners who want to do what’s best for the Filipino people.”

Ayala Land unit Makati Development Corp. (MDC) headed the fit-out construction for 9,700 sqm. of space at WTC in the week it took to build it.

The facility was designed and built following IATF and the DOH guidelines, with layout and design by MDC and architect Daniel Lichauco. WTC is now equipped with 500 beds enclosed in safe, clean, and controlled isolation cubicles, as well as examination rooms, nurses’ stations, doctors’ work areas, and medical staff quarters.

Ayala Land’s “long standing and successful partnership with BCDA in Bonifacio Global City is a testament of how the public and private sector can work together for the benefit of the community and our country,” Dy adds. 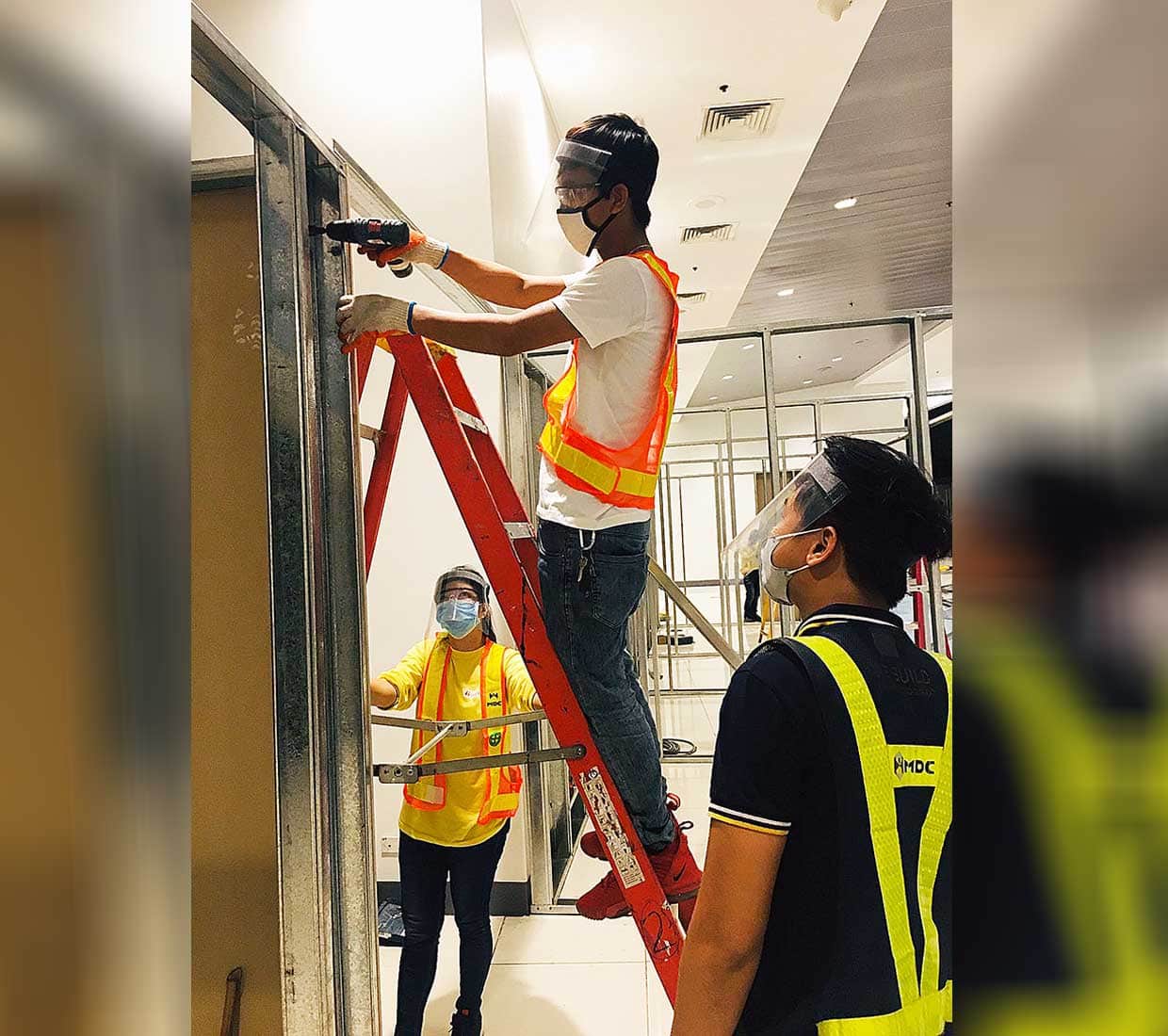 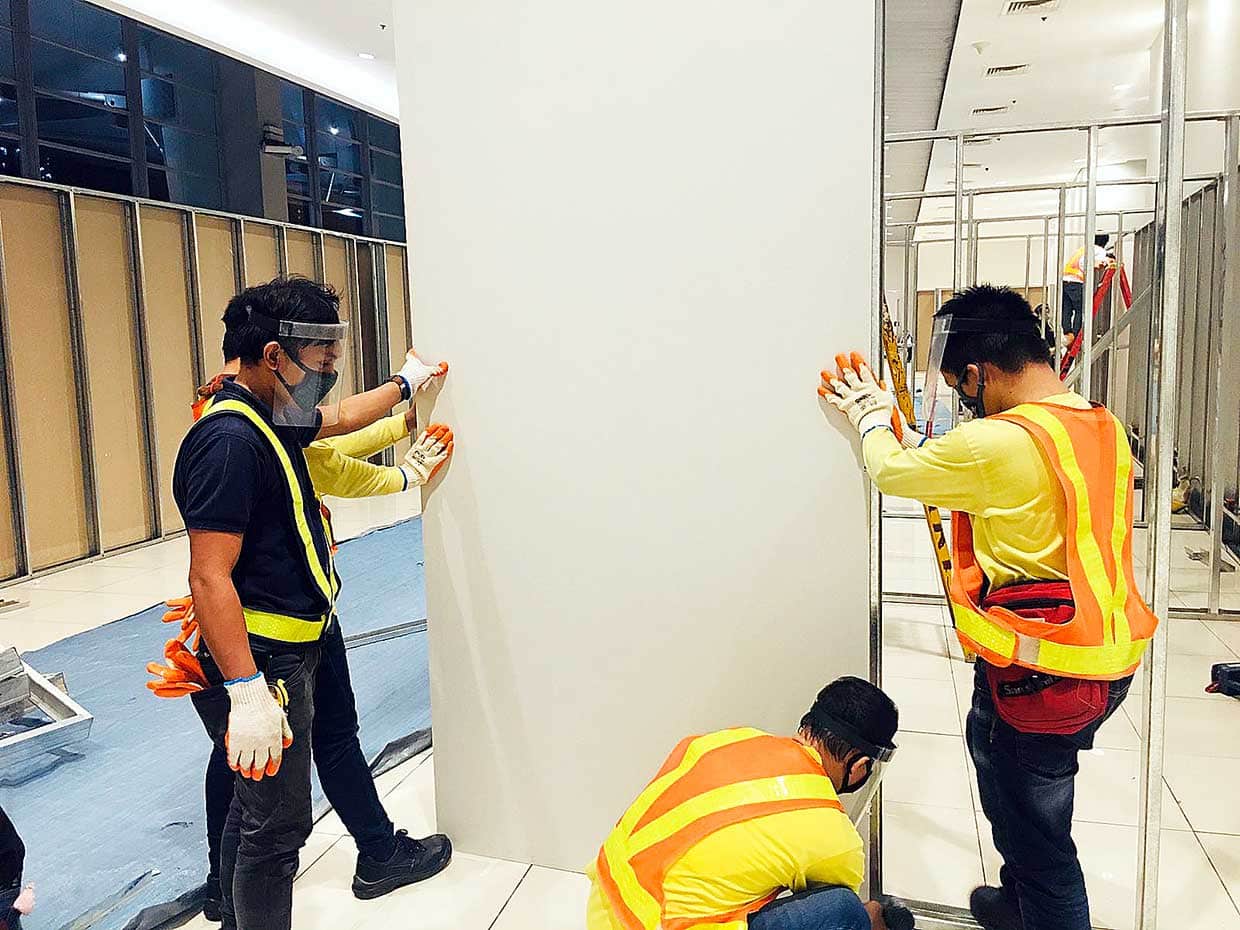 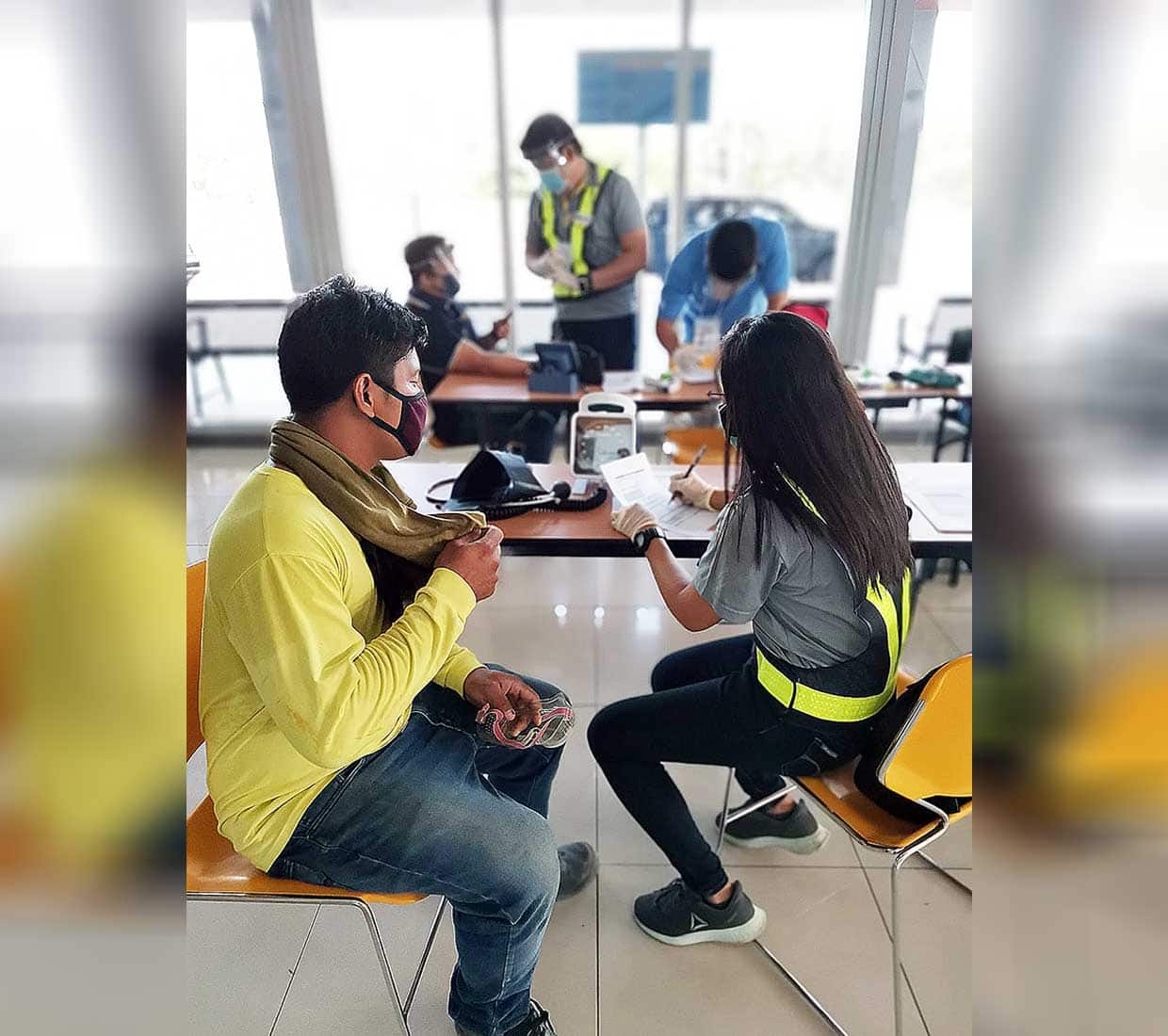 The WTC conversion was built through the sweat of 300 brave volunteers working in two shifts. It was completed in just seven days.

“When Vince Dizon, president of BCDA, asked if we would be open to converting the World Trade Center into a triage facility, we quickly started planning and mobilized to get the work done in the shortest possible time. We knew how critical this project was for our country. More beds are needed to be able to increase the capacity of our healthcare system and accommodate those who have been afflicted by COVID-19. It was an opportunity for us, through MDC, to continue help in this crisis, leveraging on the resources and capability of the Ayala Group of Companies. Other Ayala group companies who participated were Globe, MWC, IMI and AC Energy.”

Unlike any other Ayala Land project, the WTC conversion was built through the sweat of 300 brave volunteers working in two shifts. All this while keeping the volunteers safe.

Dy says MDC project managers had to “adopt a different approach primarily to ensure the safety of the people in the area. The construction team worked with the same focus and energy as they typically do in our projects, but knowing that that this will serve an urgent need of our country and for a greater purpose.”

BCDA president Vince Dizon says, “The facility is a triage as well as isolation facility for COVID-19 positive patients without symptoms or with mild symptoms. COVID positive patients from cities assigned in this facility will be transported to WTC, will undergo triage, and those who will clinically fall under asymptomatic or with mild symptoms will be admitted while the others will be transferred to higher capability health facility.”

The mezzanine floor of WTC was converted into a resting area for the health workers, where they are separated from the patient areas and have access to their own toilet and shower facilities.

Dizon adds that WTC facility is one of four large venues being converted into a COVID healthcare center. “It is the largest so far with 502 beds. The AFP will lead in the operations of the facility. The facility will accommodate patients from Makati, Pasay, Paranaque, Muntinlupa, Taguig, Pateros, Pasig, Marikina, and Mandaluyong.”

Did Pasay City object WTC being converted into a quarantine facility? Not at all, says Dy. “The local government was very supportive of the project. I think that this project wouldn’t be possible without the cooperation of the government and the private sector. It is an honor to be part of this collaborative effort that will benefit so many Filipinos, especially those who are afflicted and in most need.”

Dizon says, “The WTC quarantine facility will basically house and isolate COVID-19 positive patients so that they will not be infecting their family members and the general public. This facility will also be able to take care of their basic needs as well as supportive medical treatment. If their condition worsens, they will be assessed if they need to be transferred to a step-up COVID-19 health facility. The medical staff will all be from the AFP and the facility will not be equipped for intubation and dialysis.”

Globe Telecom funded a large portion of the facility’s construction cost, as well as unlimited Wi-Fi services. MEC provided the spaces in WTC rent-free. It also supplied bathroom toiletries in addition to security and janitorial services.

WTC Metro Manila president and CEO Pamela D. Pascual recalls, “Even before MEC, the owner of World Trade Center Metro Manila, was approached through the ICCP Group, we were already thinking about offering the exhibition hall, either as a Command or Testing Center for COVID-19.”

WTC is among the largest events facilities in the country, having hosted several big gatherings such as the Association of Southeast Asian Nations in 2017 and the Southeast Asian Games in 2019.

“So when this came into fruition, through the partnership with Ayala Group, we are more than happy and proud to be given the chance to make a difference by helping government in its fight to quell COVID-19,” Pascual explains.

The facility was turned over on April 14 to the Armed Forces of the Philippines Health Service Command, who will serve as its medical operator.

For its continued operations, AC Energy donated 500 bedframes and pillows and has committed to cover 50 percent of the facility’s electricity costs until May 31. Partner donor Manila Electric Co. has pledged to cover the other half.

For its part, IMI is providing two sanitation booths at the entrance of the facility and another two at the exit.

Other donors include the Philippine Constructors Association, which contributed cubicles for the facility; Smart Communications Inc., which set up the WiFi internet connectivity; and San Miguel Corp., which is supplying the center’s alcohol requirements. MDC construction partners also contributed supplies and equipment to complete the fit-out of the facility. Collectively, Ayala’s partners in this initiative contributed P29.5 million.

Several companies were tapped to provide security, cleaning and maintenance, and laundry services. Food commissary suppliers and a cafeteria operator have also been recruited.

The cost of medical equipment, supplies, and services will be shouldered by the national government along with private donors and other financiers.

“We are grateful to all of our private partners for setting up facility in such a short period of time. In partnership with ICCP Group, Ayala Group, and Meralco, the conversion of the World Trade Center Metro Manila into a COVID-19 quarantine facility is testament to what the public and private sectors can achieve when they work together for the good of our country,” Dizon says.

The Ayala Group’s contributions to the conversion of WTC into a quarantine area for COVID-19 patients is its latest in a string of initiatives to help stem the spread of the virus.

Most recently, the Ayala Group took part in Project Ugnayan, a relief effort together with more than 50 private companies and in partnership with the Philippine Disaster Resilience Foundation and Caritas Manila.

Through Project Ugnayan, the country’s leading businesses were able to raise P1.7 billion for the purchase of grocery vouchers that aims to feed 1.5 million urban poor families or 7.6 million individual residents who are most burdened by the enhanced community quarantine in Metro Manila.